Pushing the limits of the largest single-aperture millimetre telescope in the world, and coupling it with gravitational lensing, University of Massachusetts Amherst astronomer Alexandra Pope and colleagues report that they have detected a surprising rate of star formation, four times higher than previously detected, in a dust-obscured galaxy behind a Frontier Fields cluster. 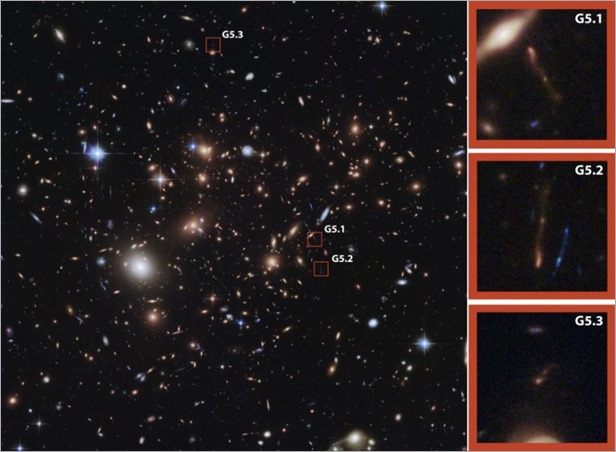 As Pope explains, "This very distant, relatively typical galaxy is known to us, and we knew it was forming stars, but we had no idea what its real star-formation rate was because there is so much dust surrounding it. Previous observations couldn't reach past that. Finding out that 75 percent of its star formation was obscured by dust is remarkable and intriguing. These observations clearly show that we have more to learn."

She adds, "Historians want to know how civilizations were built up, and we astronomers want to know where and how the elements in the universe were formed and where everything is made of, came from." The study is accepted for publication in The Astrophysical Journal.

The new tool that has made such revelations possible is the 50-meter Large Millimeter Telescope (LMT) which has been observing as a 32-meter telescope located on an extinct volcano in central Mexico in "early science mode" since 2013. Operated jointly by UMass Amherst and Mexico's Instituto Nacional de Astrofísica, Optical y Electronica (INAOE), it offers astonishing new power to peer into dusty galaxies, the astrophysicist says.

Pope, an expert at analysing how dust masks star formation, says tracing dust-obscured galaxies at early epochs offers good signposts for understanding how the universe became enriched with metals over time. "We know at the basic level that metals are formed in stars, but the rate of build-up over cosmic time we don't know," she points out. "We know what we see today but we don't know how it came about, and we want to fill in that picture."

Overall, she and colleagues write, "This remarkable lower-mass galaxy showing signs of both low metallicity and high dust content may challenge our picture of dust production in the early universe."

Before the AzTEC camera on the LMT took observations of this galaxy, astronomers relied on Hubble Space Telescope images to study star formation, Pope says. But most star formation is obscured by dust, so the Hubble images could not make a complete census of the build-up of stars in this galaxy. "Previous millimetre observations have been limited to the most extreme dusty galaxies. With this study, we have detected a surprisingly high rate of dust-obscured star formation in a typical galaxy in the early universe."

With gravitational lensing, researchers use a foreground mass -- another galaxy or a galaxy cluster -- as a lens. As light from very distant, background galaxies passes through, it is magnified. "This technique offers a way to see things that are much fainter than your telescope can see," she notes. As traced in Hubble images, the lensed galaxy they studied in the Frontier Fields cluster showed it forming only about four solar masses of new stars per year, which is a "fairly typical" observation and unsurprising to astronomers today, Pope says. "But then the LMT observations revealed another 15 solar masses per year, which means we had been missing about three-quarters of the star formation going on."

She adds, "We are not yet at the level of detecting all of the star formation going on, but we are getting better. One of the big goals for us is to push observations at longer wavelengths and to trace these very dusty galaxies at early epochs. We are pushing observations in this direction and the fact that Hubble found only one quarter of the star formation in this distant normal galaxy is a huge motivation for doing a lot more studies like this."

As early as next year, Pope and her colleague Grant Wilson will install on the LMT a new state-of-the-art imaging system he is building, dubbed TolTEC. It will offer mapping speed 100 times faster than the LMT's current capability making it the fastest millimetre-wavelength polarimetric camera on Earth for conducting deep surveys of the universe, Wilson says. It should allow astronomers to create a census of star-forming galaxies, and observations that require five years to complete today will be done in a little over one week.