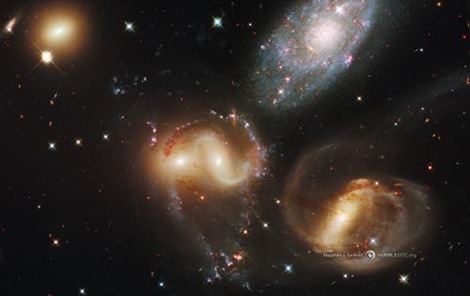 In research published today, Australian scientists have taken a critical step towards understanding why different types of galaxies exist throughout the Universe.

The research, made possible by cutting-edge AAO instrumentation, means that astronomers can now classify galaxies according to their physical properties rather than human interpretation of a galaxy’s appearance.

For the past 200 years, telescopes have been capable of observing galaxies beyond our own galaxy, the Milky Way.

Only a few were visible to begin with but as telescopes became more powerful, more galaxies were discovered, making it crucial for astronomers to come up with a way to consistently group different types of galaxies together.

In 1926, the famous American astronomer Edwin Hubble refined a system that classified galaxies into categories of spiral, elliptical, lenticular or irregular shape. This system, known as the Hubble sequence, is the most common way of classifying galaxies to this day.

Despite its success, the criteria on which the Hubble scheme is based are subjective, and only indirectly related to the physical properties of galaxies. This has significantly hampered attempts to identify the evolutionary pathways followed by different types of galaxies as they slowly change over billions of years. 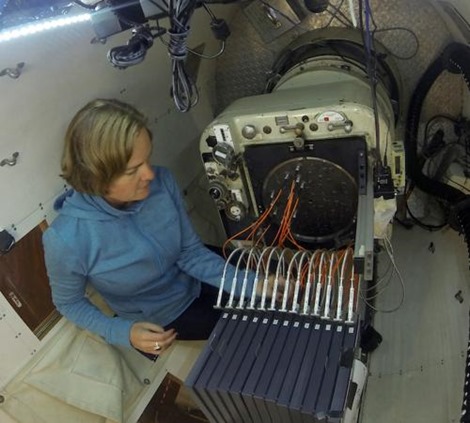 Dr Luca Cortese, from The University of Western Australia node of the International Centre for Radio Astronomy Research (ICRAR), said the world’s premier astronomical facilities are now producing surveys consisting of hundreds of thousands of galaxies rather than the hundreds that Hubble and his contemporaries were working with.

“We really need a way to classify galaxies consistently using instruments that measure physical properties rather than a time consuming and subjective technique involving human interpretation,” he said.

In a study led by Dr Cortese, a team of astronomers has used a technique known as Integral Field Spectroscopy to quantify how gas and stars move within galaxies and reinterpret the Hubble sequence as a physically based two-dimensional classification system.

“Thanks to the development of new technologies, we can map in great detail the distribution and velocity of different components of galaxies. Then, using this information we’re able to determine the overall angular momentum of a galaxy, which is the key physical quantity affecting how the galaxy will evolve over billions of years. 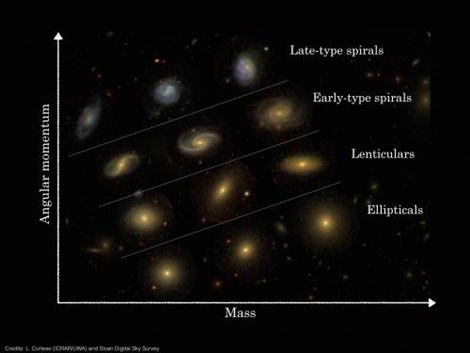 “Remarkably, the galaxy types described by the Hubble scheme appear to be determined by two primary properties of galaxies–mass and angular momentum. This provides us with a physical interpretation for the well known Hubble sequence whilst removing the subjectiveness and bias of a visual classification based on human perception rather than actual measurement.”

The new study involved 488 galaxies observed by the 3.9m Anglo Australian Telescope in New South Wales and an instrument attached to the telescope called the Sydney-AAO Multi-object Integral-field spectrograph or ‘SAMI’.

The SAMI project, led by the University of Sydney and the ARC Centre of Excellence for All-sky Astrophysics (CAASTRO), aims to create one of the first large-scale resolved survey of galaxies, measuring the velocity and distribution of gas and stars of different ages in thousands of systems.

“Australia has a lot of expertise with this type of astronomy and is really at the forefront of what’s being done,” said Professor Warrick Couch, Director of the Australian Astronomical Observatory and CAASTRO Partner Investigator.

“For the SAMI instrument we succeeded in putting 61 optical fibres within a distance that’s less than half the width of a human hair.

“That’s no small feat, it’s making this type of work possible and attracting interest from astronomers and observatories from around the world.”

Future upgrades of the instrument are planned that will allow astronomers to obtain even sharper maps of galaxies and further their understanding of the physical processes shaping the Hubble sequence.

“As we get better at doing this and the instruments we’re using are upgraded, we should be able to look for the physical triggers that cause one type of galaxy to evolve into another—that’s really exciting stuff,” Dr Cortese said.