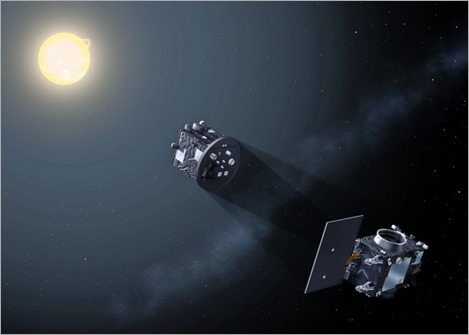 By converging in orbit, a pair of small satellites will open a new view on the source of the largest structure in the Solar System: the Sun’s ghostly atmosphere, extending millions of kilometres out into space.

The two satellites together are called Proba-3, set for launch in late 2019. Through precise formation flying, one will cast a shadow across the second to open up an unimpeded view of the inner area of the ‘corona’, which is a million times fainter than the blindingly brilliant solar disc.

“When I first heard of the idea I said ‘Wow! That’s just what we need’,” said Andrei Zhukov of the Royal Observatory of Belgium, serving as Principal Investigator for Proba-3’s solar instrument.

“The best way to observe the corona from the ground is during a solar eclipse, although we still have to cope with stray light – we cannot correct for the influence of Earth’s atmosphere.

“The next best method is by using ‘coronagraphs’ to create an artificial eclipse, either on ground telescopes or inside Sun-watching satellites such as SOHO and Stereo.

“The problem is that stray light bending around the edge of the occulting disc limits our view of the most important inner portion of the corona. SOHO’s coronagraph, for instance, can observe no closer in than 1.1 Sun-diameters. Others can see closer, but with strong stray light making detailed observation impossible. 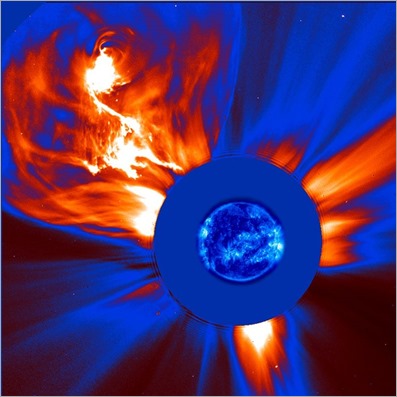 “With Proba-3 we aim to see extremely close to the solar surface in visible light, by flying the occulted and coronagraph on separate satellites some 150 m apart.

“This should give us a ringside seat on the most interesting segment of the corona, where a lot of interesting physics is going on, where the solar wind is born and ‘coronal mass ejections’ originate – gigantic solar eruptions with the potential to affect our terrestrial infrastructure.”

While the Sun’s surface is a comparatively cool 6000ºC, the corona averages a sizzling million degrees. The mystery is how energy travels from the cool Sun to the hot corona, in apparent defiance of the laws of thermodynamics.

“By mapping the fine structure of the inner corona for a prolonged time – we are targeting around six hours – our hope is that we gain insight into the kind of energy flows that are taking place,” notes Dr Zhukov.

“Our standard observing mode will be once per minute, but we could speed that up to a few seconds within a selected field of view, for instance when tracing the rapid evolution of a mass ejection.

“The ultimate goal is to be able to solve the physics of space weather, in order to forecast coronal mass ejections, which are known to have dramatic effects on terrestrial electricity grids and other infrastructure.”

Proba-3 is first and foremost a technology demonstration, exploring the potential of precise formation flying in orbit, but achieving meaningful scientific results will also help to prove its approach works.