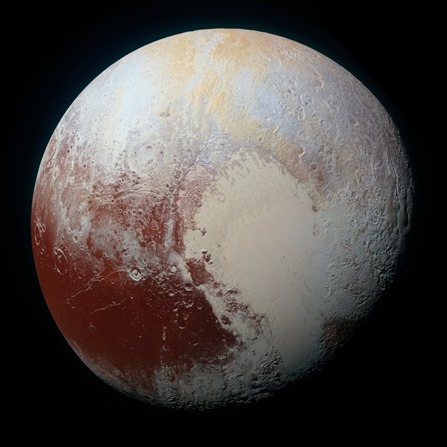 Humanity's first up-close look at Pluto was so intriguing that some researchers want to go back and spend a lot more time studying the icy world.

Late last month, 35 scientists met for 7 hours in Houston to discuss the basic blueprint and science goals of a potential Pluto orbiter mission. Such an effort would build upon the knowledge gained during the epic Pluto flyby performed in July 2015 by NASA's New Horizons probe.

Participants came away from the April 24 workshop fired up and committed to doing their best to make such a project happen, said New Horizons principal investigator Alan Stern, who was there. [Destination Pluto: NASA's New Horizons Mission in Pictures]

The meeting was reminiscent, Stern said, of New Horizons' earliest days: the late 1980s, when he and a few other people first raised the possibility of launching a flyby mission to Pluto.

"It felt a lot like that, but [with] a new generation of people," Stern, who's based at the Southwest Research Institute in Boulder, Colorado, told Space.com.

New Horizons' flyby revealed Pluto to be a stunningly diverse world with vast plains of nitrogen ice, 2-mile-high (3.2 kilometers) mountains of water ice and a wealth of other surface features. But the probe got just a fleeting look at the dwarf planet system while zooming by; an orbiter would linger and lift Pluto's veil even more, Stern said.

"You could map every square inch of the planet and its moons," he said. "It would be a scientific spectacular."

As the possible mission is currently envisioned, the orbiter would cruise around the Pluto system, using gravity assists from the dwarf planet's largest moon, Charon, to slingshot it here and there, Stern said. The strategy would be similar to that employed by NASA's Cassini spacecraft, which has shaped its path through the Saturn system over the years via flybys of the ringed planet's largest moon, Titan.

The current concept is therefore different from one Stern proposed shortly after New Horizons' flyby, which would have put a lander down on Charon.

With a Charon lander, "you're stuck looking at one side of Pluto," Stern said. (Charon and Pluto are tidally locked, meaning each world always shows the same face to the other.) 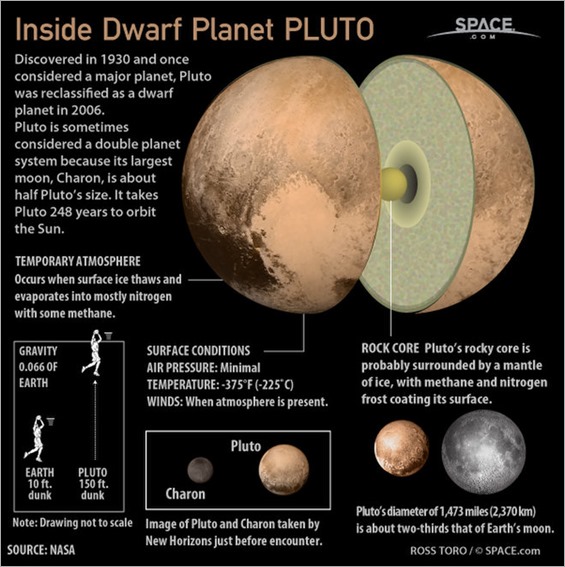 "And you can't get in superclose. You can't get down in the atmosphere," he added. "This, I think, is a better mission concept."

Though the mission would be Cassini-like, the Pluto orbiter itself would resemble NASA's Dawn probe, which is currently circling the dwarf planet Ceres, Stern said. Like Dawn, the Pluto probe would likely use electric propulsion and have a half-dozen science instruments, he said.

However, because the Pluto orbiter would be operating so far from the sun, it would rely on nuclear power to generate its electricity, rather than sunlight, as Dawn does, Stern added. And the price tag would be higher than Dawn's $467 million; the Pluto effort would probably qualify as a New Frontiers mission or a small flagship. (New Frontiers missions cost about $1 billion, whereas flagships run about $2 billion.)

Stern said a Pluto orbiter could get off the ground in the late 2020s or so. A 2030 launch would have ceremonial significance, coming on the 100th anniversary of Pluto's discovery, he added. The probe would spend seven or eight years journeying to the dwarf planet, then perhaps four or five years studying Pluto and its moons.

When the probe's work there was done, Stern said, the spacecraft could conceivably use one last Charon flyby to escape the Pluto system and head toward another object in the Kuiper Belt, the ring of frigid bodies beyond Neptune's orbit. (New Horizons is doing something similar; it's now headed for a Jan. 1, 2019, flyby of a small Kuiper Belt object called 2014 MU69.)

But a Pluto orbiter mission is a long way from becoming reality, Stern stressed. He said he and his fellow researchers aim to mature the concept in time for it to be considered during the next Planetary Science Decadal Survey, a U.S. National Research Council effort that sets exploration priorities for NASA every 10 years.

"The curtain is opening," he said of the Pluto orbiter idea. "This thing is going to be a topic of discussion now for the next few years."