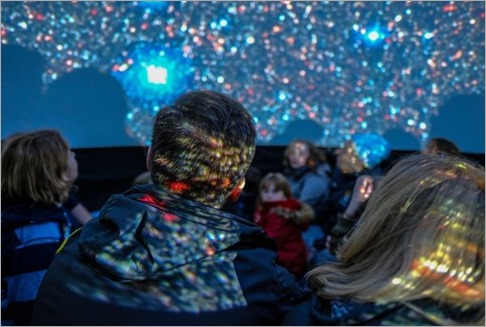 Exploring the celestial wonders above North Yorkshire is being made easier thanks to a £15,000 investment in a pop-up planetarium and two powerful portable telescopes by a Scarborough firm.

The success of the 2016 and this February’s Festivals led to a spike in visitor interest for eyeing the dark skies and a surge in bookings for Hidden Horizons’ celestial exploring events.

Now, aided by a 50% grant from the North York Moors National Park Authority and additional support from the Forestry Commission, Hidden Horizons has purchased an inflatable planetarium, solar telescope and one of the county’s largest publicly-accessible portable telescopes to meet the growing interest.

The portability of the equipment means the company can now bring the wonders of the universe to schools, pubs, hotels and other public and private venues right across the region.

The beauty of the planetarium, which spans four-metres in diameter and can accommodate up to 30 children or 20 adults, means that Hidden Horizons can run sessions even if the weather prevents trips outdoors.

During the day the powerful solar telescope will enable visitors to safely observe sunspots and dramatic flares while the night sky telescope will lead budding astronomers on a journey deep into the universe, with its ability to reveal up to 40,000 objects at any one time.

“We’re very fortunate to have a great, expansive dark skies area on our doorstep and people are catching on to this.

Increasing numbers of stargazing bookings are coming from visitors outside the region, from as far afield as Manchester, London and even Singapore, and so this investment will really boost our offer, particularly as it increases our flexibility to stage pop-up astronomy evenings at a huge variety of venues.”

“We were delighted to extend grant funding for this initiative as it is a great legacy of the Dark Skies Festival and taps into the nation’s growing enthusiasm for stargazing. It will also help support other tourism businesses by providing a further draw for people to visit and stay in the National Park particularly during those months when footfall tends to drop off.”