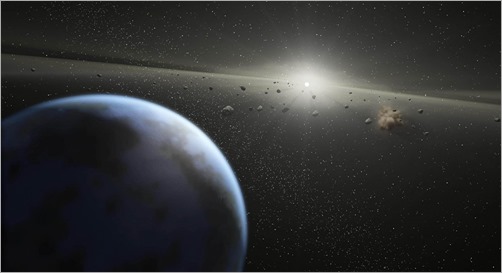 One of the largest and most famous annual meteor showers may have taken a sinister turn, as the risk of the shower heralding a large asteroid on a track to smash into Earth and cause untold devastation has become more and more significant, according to Czech astronomers.

The Astronomical Institute of the Czech Academy of Sciences came to their grim conclusions after observing the Taurid meteor shower, which appears twice a year in the night sky: once during the early summer and once around Halloween.

A meteor shower occurs when Earth's movements send it through a stream of cosmic debris. Typically, the meteoroids that would hit Earth either disintegrate or are shrunken to a tiny size by Earth's atmosphere.

"We performed careful analysis of 144 Taurid fireballs observed by new digital autonomous fireball observatories of the European Fireball Network displaced over Czech Republic at 13 stations, Austria and Slovakia in 2015, when the activity was enhanced," researchers said.

The brightest fireball studied "was caused by a body in excess of 1,000 kg (2,204 lb), which corresponds to diameter more than one meter. Based on orbital similarity, we argue that asteroids of several hundred meters in diameter are members of the Taurid new branch as well."

The good news is that the larger asteroids seem to be porous and fragile, meaning they're more likely to split apart and subsequently disintegrate when they enter Earth's atmosphere. However, there's no guarantee that will happen.

Many of the Taurids come from Encke, a comet that orbits the sun and has been slowly crumbling over the last 30,000 years. Some astronomers have suggested that the Tunguska event, when a 500-foot asteroid exploded a few miles off the ground and flattened 770 square miles of Siberian wilderness in 1908, was caused by a fragment of Encke. The explosion was comparable to that of a 20-megaton nuclear bomb and would have been cataclysmic had it hit a densely populated area.