Comet 252P/Linear puts on a show 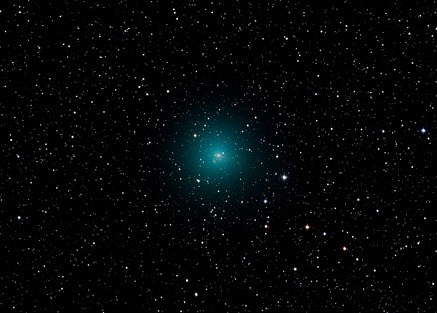 At magnitude +7 COMET 252P/Linear continues to put on a show in the constellation Ophiuchus after midnight.

This image of the comet by Ivan Gendorf on 28 April shows its nucleus and green Coma nicely.

The BAA Comet section Director Nick James said that 252P/LINEAR made a close pass (0.0356 au) on March 21 and reached 4th magnitude, but is now fading.

It is a large, diffuse, object and may be difficult to see from sites affected by light pollution.  It is best seen in the morning sky.  It brightened rapidly and, as is often the case with such objects, there were reports that the comet was in outburst, however the degree of condensation remained low.  A linear light curve fits the observations best, with the comet at peak output 29 days after perihelion.  The rate of brightening was unusually rapid.  Marco Goiato reported that the coma was 150' across around the time of closest approach and visible to the naked eye.