Is there life in the Venusian atmosphere?

Recent results from ESA's Venus Express before it plummeted down through the planet's atmosphere have revealed it to be rippling with atmospheric waves – and, at an average temperature of -157°C, is colder than anywhere on Earth.

This hints that there maybe a ‘goldilocks’ region where there are warm temperatures beneficial for life to live and evolve, although the strong winds and air currents would make life difficult for any alien life flourish, it is not impossible.

The chemical spectral signatures of Venus, Earth and Mars, shown above, are very similar. This gives astronomers a guide to what to look for in the atmospheres of far away planets orbiting distant stars in the hunt for alien life.

As well as telling us much about Venus' previously-unexplored Polar Regions and improving our knowledge of our planetary neighbour, the experiment holds great promise for ESA's ExoMars mission, which is currently winging its way to the Red Planet. The findings were published in the journal Nature Physics on 11 April 2016.

ESA's Venus Express arrived at Venus in 2006. It spent eight years exploring the planet from orbit, vastly outliving the mission's planned duration of 500 days, before running out of fuel. The probe then began its descent, dipping further and further into Venus' atmosphere, before the mission lost contact with Earth and officially ended in December 2014.

When Müller-Wodarg and colleagues of Imperial College London, UK, gathered their observations, Venus Express was orbiting at an altitude of between 130 and 140 kilometres near Venus' Polar Regions, in a portion of Venus' atmosphere that had never before been studied before.

For one, the polar atmosphere is up to 70 degrees colder than expected, with an average temperature of -157°C (114 K). The polar atmosphere is also not as dense as expected; at 130 and 140 km in altitude, it is 22% and 40% less dense than predicted, respectively. When extrapolated upward in the atmosphere, these differences are consistent with those measured previously by VExADE at 180 km, where densities were found to be lower by almost a factor of two.

"This is in-line with our temperature findings, and shows that the existing model paints an overly simplistic picture of Venus' upper atmosphere," added Müller-Wodarg. "These lower densities could be at least partly due to Venus' polar vortices, which are strong wind systems sitting near the planet's poles. Atmospheric winds may be making the density structure both more complicated and more interesting!" 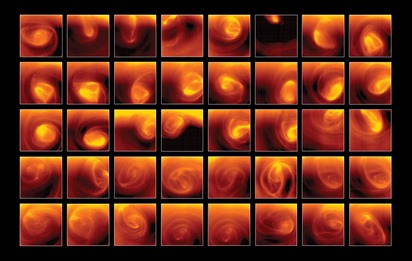 Additionally, the polar region was found to be dominated by strong atmospheric waves, a phenomenon thought to be key in shaping planetary atmospheres – including our own.

"By studying how the atmospheric densities changed and were perturbed over time, we found two different types of wave: Atmospheric gravity waves and planetary waves," explained co-author Sean Bruinsma of the Centre National D'Etudes Spatiales (CNES), France. "These waves are tricky to study, as you need to be within the atmosphere of the planet itself to measure them properly. Observations from afar can only tell us so much."

Atmospheric gravity waves are similar to waves we see in the ocean, or when throwing stones in a pond, only they travel vertically rather than horizontally. They are essentially a ripple in the density of a planetary atmosphere – they travel from lower to higher altitudes and, as density decreases with altitude, become stronger as they rise. The second types, planetary waves, are associated with a planet's spin as it turns on its axis; these are larger-scale waves with periods of several days.

We experience both types on Earth. Atmospheric gravity waves interfere with weather and cause turbulence, while planetary waves can affect entire weather and pressure systems. Both are known to transfer energy and momentum from one region to another, and so are likely to be hugely influential in shaping the characteristics of a planetary atmosphere.

"We found atmospheric gravity waves to be dominant in Venus' polar atmosphere," added Bruinsma. "Venus Express experienced them as a kind of turbulence, a bit like the vibrations you feel when an aeroplane flies through a rough patch. If we flew through Venus' atmosphere at those heights we wouldn't feel them because the atmosphere just isn't dense enough, but Venus Express' instruments were sensitive enough to detect them."

Venus Express found atmospheric waves at an altitude of 130-140 km that the team think originated from the upper cloud layer in Venus' atmosphere, which sits at and below altitudes of approximately 90 km, and a planetary wave that oscillated with a period of five days. "We checked carefully to ensure that the waves weren't an artefact of our processing," said co-author Jean-Charles Marty, also of CNES.

This is not just a first for Venus Express; while the aero braking technique has been used for Earth satellites, and was previously used on NASA-led missions to Mars and Venus, it had never before been used on any ESA planetary mission.

However, ESA's ExoMars Trace Gas Orbiter, which launched earlier this year, will use a similar technique. "During this activity we will extract similar data about Mars' atmosphere as we did at Venus," added Håkan Svedhem, project scientist for ESA's ExoMars 2016 and Venus Express missions.

"For Mars, the aero braking phase would last longer than on Venus, for about a year, so we'd get a full dataset of Mars' atmospheric densities and how they vary with season and distance from the Sun," added Svedhem. "This information isn't just relevant to scientists; it's crucial for engineering purposes as well. The Venus study was a highly successful test of a technique that could now be applied to Mars on a larger scale – and to future missions after that."