This new image from the VLT Survey Telescope (VST) at ESO’s Paranal Observatory in Chile captures a spectacular concentration of galaxies known as the Fornax Cluster, which can be found in the southern hemisphere constellation of Fornax (The Furnace). The cluster plays host to a menagerie of galaxies of all shapes and sizes, some of which are hiding secrets.

Galaxies, it seems, are sociable animals and they like to gather together in large groups, known as clusters. Actually it’s gravity that holds the galaxies in the cluster close together as a single entity, with the pull of gravity arising from large amounts of dark matter, as well as from the galaxies we can see. Clusters can contain anything between about 100 and 1000 galaxies and can be between about 5 and 30 million light-years across. 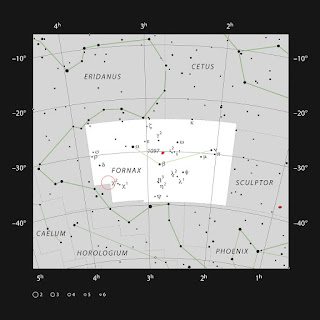 Galaxy clusters do not come in neatly defined shapes so it is difficult to determine exactly where they begin and end. However, astronomers have estimated that the centre of the Fornax Cluster is in the region of 65 million light-years from Earth. What is more accurately known is that it contains nearly sixty large galaxies, and a similar number of smaller dwarf galaxies. Galaxy clusters like this one are commonplace in the Universe and illustrate the powerful influence of gravity over large distances as it draws together the enormous masses of individual galaxies into one region.

At the centre of this particular cluster, in the middle of the three bright fuzzy blobs on the left side of the image, is what is known as a cD galaxy — a galactic cannibal. cD galaxies like this one, called NGC 1399, look similar to elliptical galaxies but are bigger and have extended, faint envelopes. This is because they have grown by swallowing smaller galaxies drawn by gravity towards the centre of the cluster.
Indeed, there is evidence that this process is happening before our eyes — if you look closely enough. Recent work by a team of astronomers led by Enrichetta Iodice (INAF – Osservatorio di Capodimonte, Naples, Italy), using data from ESO’s VST, has revealed a very faint bridge of light between NGC 1399 and the smaller galaxy NGC 1387 to its right. This bridge, which has not been seen before (and is too faint to show up in this picture), is somewhat bluer than either galaxy, indicating that it consists of stars created in gas that was drawn away from NGC 1387 by the gravitational pull of NGC 1399. Despite there being little evidence for ongoing interactions in the Fornax Cluster overall, it seems that NGC 1399 at least is still feeding on its neighbours. 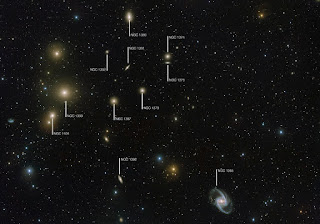 Towards the bottom right of this image is the large barred spiral galaxy NGC 1365. This is a striking example of its type, the prominent bar passing through the central core of the galaxy, and the spiral arms emerging from the ends of the bar. In keeping with the nature of cluster galaxies, there is more to NGC 1365 than meets the eye. It is classified as a Seyfert Galaxy, with a bright active galactic nucleus also containing a supermassive black hole at its centre.
This spectacular image was taken by the VLT Survey Telescope (VST) at ESO’s Paranal Observatory in Chile. At 2.6 metres in diameter, the VST is by no means a large telescope by today’s standards, but it has been designed specifically to conduct large-scale surveys of the sky. What sets it apart is its huge corrected field of view and 256-megapixel camera, called OmegaCAM, which was specially developed for surveying the sky. With this camera the VST can produce deep images of large areas of sky quickly, leaving the really big telescopes — like ESO’s Very Large Telescope (VLT) — to explore the details of individual objects.
Posted by RichardP at 11:47