Evidence For Ejection of Protostars by Filaments in the Orion Nebula 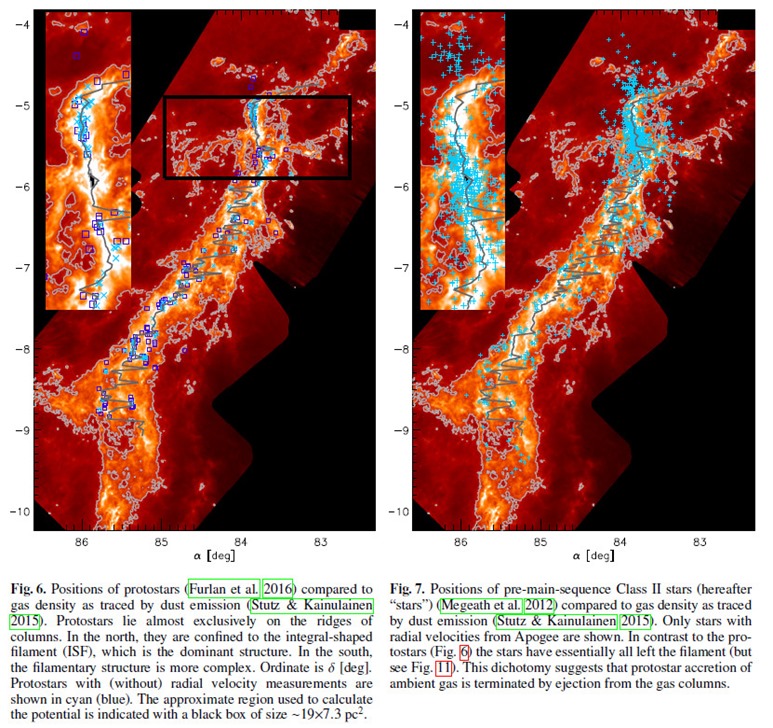 Opaque filamentary structures have been recognized in the interstellar medium (ISM) for well over a century. As already pointed out by Barnard, the undulating form and uniform width of these structures cry out for an explanation: “These [structures] are especially striking in RA = 19h23m DEC = +10° 25’, where they cover a space over 1° wide and form a rather complicated system of twisting and turnings of dark lanes....The strange thing about all such lanes is that they always are of uniform width throughout their ramifications. This must have some meaning beyond mere chance” (Barnard 1905). See B/W image. 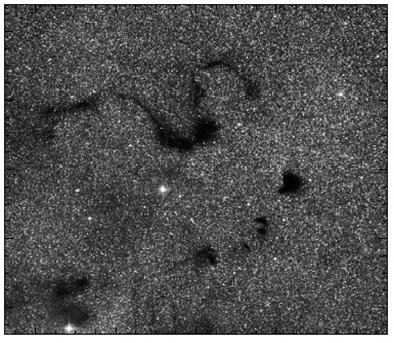 While Barnard himself does not appear to have ever heard such an explanation, it seems difficult to conceive of any other than near-critical magnetic fields, I.e., systems with comparable magnetic and gravitational potential energy. Of course, by now it is well known from cosmological simulations (which are well matched by observations) that gravity alone can produce filamentary structures.

However, these never have Barnard’s “twisting and turnings” because such morphologies would be unstable under the influence of gravity alone. They require a competition to gravity from a restoring force. While the general understanding that stars form from collapsing clouds of gas goes back more than 300 years (Kant 1755), the fact that such clouds are embedded in gas filaments has only become clear over the last 50 years with the discovery, and gradually improving measurement, of Class 0 and Class I Protostars directly superposed on filamentary structures in Orion, Aquila, Taurus, etc. (e.g., Andr´e et al. 2014; Stutz & Kainulainen 2015).

The discovery by Heiles (1997) that the Orion A filament (the largest nearby star-forming such structure) is enveloped in a helical magnetic field greatly clarified the nature of these filaments. 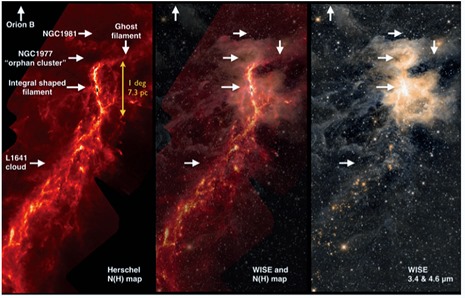 The observations show magnetic field lines changing direction as they cross the filament, from into & out of the plane of the sky. Since these are one-dimensional (1-D) projections of an intrinsically 3-D field structure, they cannot be uniquely interpreted by themselves. However, given that circular (or more generally, helical) fields, which would be generated primarily by currents moving along the filaments, are the form that is necessary to confine filaments of approximately uniform thickness, the Heiles (1997) observations constituted a “smoking gun”. Moreover, polarization measurements by Matthews & Wilson (2000) provide information in a second dimension that confirms this picture. That is, under the assumption that this polarization arises from dust grains aligned by either paramagnetic inclusions or radioactive torques, the field lines pass over the filament perpendicular to its axis. See their Figure 1. Subsequent observations confirm these results (Poidevin et al. 2010, 2011). 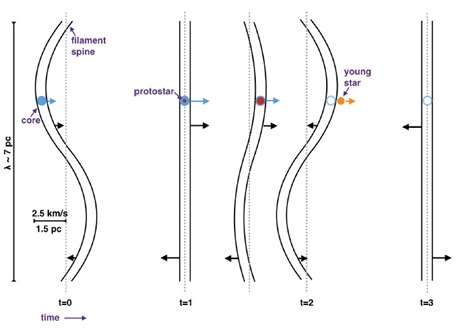 From Herschel data. This allows us to estimate the gravitational potential on all scales from the resolution limit (about 0.04 pc) to 8.5 pc. This sets the stage to examine the kinematics of the stars and gas in a new light and to derive far-reaching conclusions.

In particular, we argue for a new “slingshot mechanism” that “ejects” Protostars from the dense filaments that nurtured them, thereby cutting off their accretion of new gas. That is, the filaments are always undergoing transverse acceleration, and the nascent Protostars are accelerated with them. When the protostar system becomes sufficiently massive to decouple from the filament, it is released. See for a schematic diagram of the process. As with a terrestrial hunter’s slingshot, no impulse is imparted to the projectile at the moment of release. Rather, it is the filament that accelerates away from the protostar. As with the hunter, so with the Hunter.