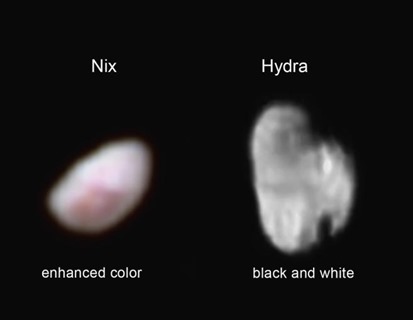 This compositional data (infrared spectra) was gathered with the Ralph/Linear Etalon Imaging Spectral Array (LEISA) instrument on July 14, 2015, from a distance of 150,000 miles (240,000 kilometres). It shows the unmistakable signature of crystalline water ice: a broad absorption from 1.50 to 1.60 microns and a narrower water-ice spectral feature at 1.65 microns.

The Hydra spectrum is similar to that of Pluto's largest moon, Charon, which is also dominated by crystalline water ice. But Hydra's water-ice absorption bands are even deeper than Charon's, suggesting that ice grains on Hydra's surface are larger or reflect more light at certain angles than the grains on Charon. Hydra is thought to have formed in an icy debris disk produced when water-rich mantles were stripped from the two bodies that collided to form the Pluto-Charon binary some 4 billion years ago. Hydra's deep water bands and high reflectance imply relatively little contamination by darker material that has accumulated on Charon's surface over the past 4 billion years.

Why does Hydra's ice seem to be cleaner than Charon's? One theory is that micrometeorite impacts continually refresh the surface of Hydra by blasting off contaminants. This process would have been ineffective on the much larger Charon, whose much stronger gravity retains any debris created by these impacts.