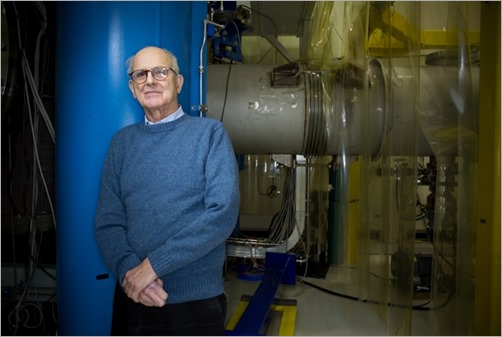 Rainer Weiss, emeritus professor of physics, is a recipient of the 2016 Kavli Prize in Astrophysics. The Kavli Prizes are awarded biennially to recognize scientists who have made seminal advances in three categories: astrophysics, nanoscience, and neuroscience.

Weiss will share the prize, including a cash award of $1 million, with Ronald Drever, emeritus professor of physics at Caltech, and Kip Thorne, Caltech’s Richard P. Feynman Professor of Theoretical Physics, emeritus. The three scientists, who are co-founders of the Laser Interferometer Gravitational-wave Observatory (LIGO), have received the prize for the direct detection of gravitational waves, according to the award citation:

“This detection has, in a single stroke and for the first time, validated Einstein’s General Theory of Relativity for very strong fields, established the nature of gravitational waves, demonstrated the existence of black holes with masses 30 times that of our sun, and opened a new window on the universe.”

On September 14, 2015, LIGO’s two interferometers — one in Washington, the other in Louisiana — picked up a signal that lasted just one-fifth of a second. For the next few months, LIGO scientists around the world would carefully analyse, verify, and verify again, to determine that this signal represented the first direct detection of gravitational waves — ripples across the universe, created by extreme cataclysmic events billions of years ago.

The scientists determined that the incredibly faint signal was produced by the spectacularly violent collision of two black holes, each about 30 times as massive as the sun, 1.3 billion light years away.

Announcing the Kavli Astrophysics recipients, in an address in Oslo, Norway, Mats Carlsson, chair of the astrophysics committee, read from the award citation:

“The detection of gravitational waves is an achievement for which hundreds of scientists, engineers, and technicians around the world share credit. Drever, Thorne, and Weiss stand out: Their ingenuity, inspiration, intellectual leadership, and tenacity were the driving force behind this epic discovery.”

Pushing for a signal

In 1972, Weiss had worked out the basic concept for an interferometer to detect gravitational waves — an idea he originally drew up as an exercise for students in his general relativity course at MIT. His concept would eventually serve as the essential blueprint for LIGO.

From LIGO’s earliest days to its most recent detection, “Weiss provided technical leadership and devoted his extraordinary experimental acumen over the next decades, contributing to every aspect of the final apparatus,” the citation reads.

In 1974, a research team led by physicists Russell Hulse and Joseph Taylor made the first detection of gravitational waves, by analysing the behaviour of two orbiting neutron stars — a detection for which the pair was awarded the Nobel Prize in physics in 1993. The detection, however, was not a direct one.

In 1975, Weiss and Thorne met for the first time at a NASA committee meeting in Washington, D.C., where they began to think about how Weiss’ interferometer design could be scaled up to make a direct detection of gravitational waves. Since the 1960s, Thorne had been evaluating how extreme events such as colliding black holes and neutron stars generate gravitational waves, and how those waves might be detected from Earth.

Weiss and Thorne pushed the concept of LIGO through numerous hurdles in funding and design, and eventually oversaw the observatory’s construction, in the form of two identical and massive instruments, each 4 kilometres long and 3,000 kilometres apart.

In 1979, Drever joined the team as the third co-founder of LIGO, and helped to perfect the design and operation of the interferometers, devising ways to increase the power and efficiency of the optical systems central to LIGO’s sensitivity.

“For the first time in history we can explore the universe’s mysteries in three regimes: electromagnetic, particle, and gravitational regime,” said France Córdova, director of the National Science Foundation, who spoke as part of the awards announcement.

Weiss received his BS in 1955 and his PhD in 1962, both from MIT. After appointments at Tufts University and Princeton University, Weiss returned to MIT as a faculty member in 1964. He has also served as an adjunct professor of physics at Louisiana State University since 2011. Weiss is a co-founder and science advisor of the NASA Cosmic Background Explorer (COBE) satellite mission, which measured the spectrum of cosmic microwave background radiation supporting the Big Bang scenario.

Weiss has received numerous awards and honours, including the 2003 Medaille de l’ADION, the 2006 Gruber Prize in Cosmology, and the 2007 Einstein Prize of the American Physical Society. He is a fellow of the American Association for the Advancement of Science, the American Academy of Arts and Sciences, and the American Physical Society, as well as a member of the National Academy of Sciences. Earlier this year, Weiss received a Special Breakthrough Prize in Fundamental Physics and the 2016 Gruber Prize in Cosmology, both shared with Drever and Thorne. Most recently, the three co-founders were also awarded the Shaw Prize in Astronomy.

Today, Weiss and Thorne watched a live broadcast of the Kavli Prize announcement from New York, as part of the World Science Festival. As their names were announced, the pair, who are close friends, shared a hug, to a standing ovation.

In a panel held after the Kavli Prize announcement to discuss the significance of each Kavli Prize, Nergis Malvalvala, who is the Curtis and Kathleen Marble Professor of Astrophysics and associate head of the Department of Physics at MIT, a LIGO team member, and a former student of Weiss’, said of LIGO’s future: “We have so much still to do. We’ve really just uncovered the very first signal. The universe is humming with signals we have yet to pick up.”