Scientists discover Ceres to be an icy ‘slush ball’ in space 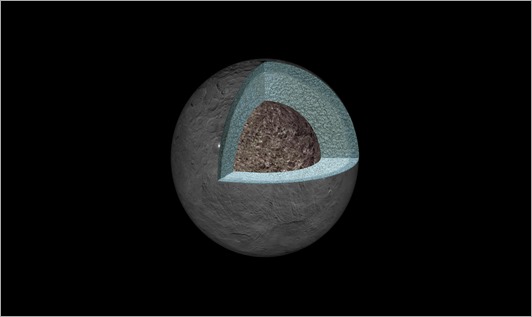 The minor planet Ceres is the largest of the Minor planets, situated in the large gap between the planets Mars & Jupiter. It is 427 miles in diameter and takes just over 4 1/2 years to orbit around the Sun.

NASA’s Dawn spacecraft has been in orbit around Ceres for the last year taking hundreds of photographs, and making careful science observations.

Since gravity dominates Dawn's orbit at Ceres, scientists can measure variations in Ceres’ gravity by tracking subtle changes in the motion of the spacecraft. Using data from Dawn, scientists have mapped the variations in Ceres' gravity for the first time in a new study in the journal Nature, which provides clues to the dwarf planet's internal structure.

"The new data suggest that Ceres has a weak interior, and that water and other light materials partially separated from rock during a heating phase early in its history," said Ryan Park, the study’s lead author and the supervisor of the solar system dynamics group at NASA’s Jet Propulsion Laboratory, Pasadena, California.

Ceres' gravity field is measured by monitoring radio signals sent to Dawn, and then received back on Earth, by NASA’s Deep Space Network. This network is a collection of large antennas at three locations around the globe that communicate with interplanetary spacecraft. Using these signals, scientists can measure the spacecraft's speed to a precision of 0.004 inches (0.1 millimetres) per second, and then calculate the details of the gravity field.

Ceres has a special property called "hydrostatic equilibrium," which was confirmed in this study. This means that Ceres' interior is weak enough that its shape is governed by how it rotates. Scientists reached this conclusion by comparing Ceres' gravity field to its shape. Ceres' hydrostatic equilibrium is one reason why astronomers classified the body as a dwarf planet in 2006.

The data indicate that Ceres is “differentiated,” which means that it has compositionally distinct layers at different depths, with the densest layer at the core. Scientists also have found that, as they suspected, Ceres is much less dense than Earth, the moon, giant asteroid Vesta (Dawn’s previous target) and other rocky bodies in our solar system. Additionally, Ceres has long been suspected to contain low-density materials such as water ice, which the study shows separated from the rocky material and rose to the outer layer along with other light materials. 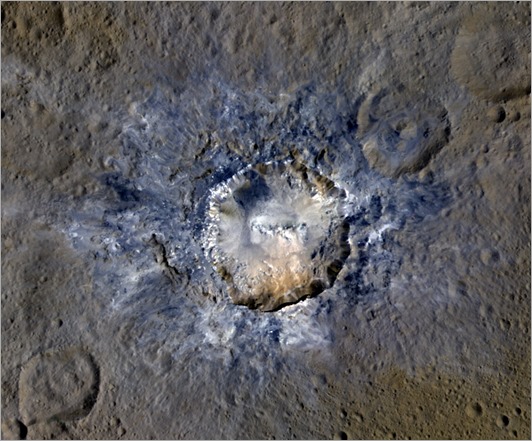 "We have found that the divisions between different layers are less pronounced inside Ceres than the moon and other planets in our solar system," Park said. “Earth, with its metallic core, semi-fluid mantle and outer crust, has a more clearly defined structure than Ceres," Park said.

Scientists also found that high-elevation areas on Ceres displace mass in the interior. This is analogous to how a boat floats on water: the amount of displaced water depends on the mass of the boat. Similarly, scientists conclude that Ceres’ weak mantle can be pushed aside by the mass of mountains and other high topography in the outermost layer as though the high-elevation areas "float" on the material below. This phenomenon has been observed on other planets, including Earth, but this study is the first to confirm it at Ceres.

The internal density structure, based on the new gravity data, teaches scientists about what internal processes could have occurred during the early history of Ceres. By combining this new information with previous data from Dawn about Ceres' surface composition, they can reconstruct that history: Water must have been mobile in the ancient subsurface, but the interior did not heat up to the temperatures at which silicates melt and a metallic core forms.

"We know from previous Dawn studies that there must have been interactions between water and rock inside Ceres," said Carol Raymond, a co-author and Dawn’s deputy principal investigator based at JPL. "That, combined with the new density structure, tells us that Ceres experienced a complex thermal history."