The Cassini Solstice mission roles on as planet’s shadow shortens 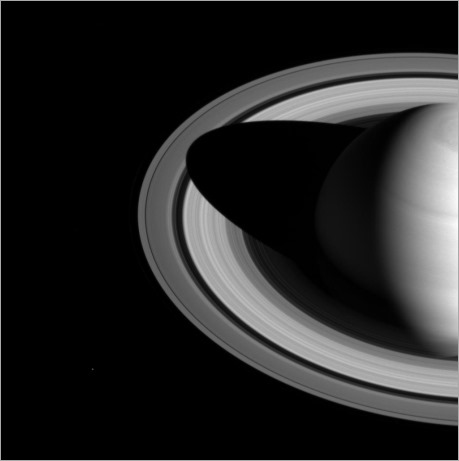 A complete seasonal period on Saturn has never been studied at this level of detail.

The shadow of Saturn on the rings, which stretched across all of the rings earlier in Cassini's mission (see PIA08362), now barely makes it past the Cassini division.

The changing length of the shadow marks the passing of the seasons on Saturn. As the planet nears its northern-hemisphere solstice in May 2017, the shadow will get even shorter. At solstice, the shadow's edge will be about 28,000 miles (45,000 kilometres) from the planet's surface, barely making it past the middle of the B ring.

The moon Mimas is a few pixels wide, near the lower left in this image.

This view looks toward the sunlit side of the rings from about 35 degrees above the ring plane. The image was taken in visible light with the Cassini spacecraft wide-angle camera on May 21, 2016.

The view was obtained at a distance of approximately 2.0 million miles (3.2 million kilometres) from Saturn. Image scale is 120 miles (190 kilometres) per pixel.