Alien life could thrive in the clouds of failed stars 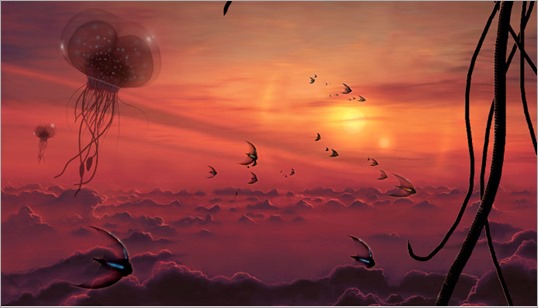 There’s an abundant new swath of cosmic real estate that life could call home – and the views would be spectacular. Floating out by themselves in the Milky Way galaxy are perhaps a billion cold brown dwarfs, objects many times as massive as Jupiter but not big enough to ignite as a star. According to a new study, layers of their upper atmospheres sit at temperatures and pressures resembling those on Earth, and could host microbes that surf on thermal updrafts.

The idea expands the concept of a habitable zone to include a vast population of worlds that had previously gone unconsidered. “You don’t necessarily need to have a terrestrial planet with a surface,” says Jack Yates, a planetary scientist at the University of Edinburgh in the United Kingdom, who led the study.

Atmospheric life isn’t just for the birds. For decades, biologists have known about microbes that drift in the winds high above Earth’s surface. And in 1976, Carl Sagan envisioned the kind of ecosystem that could evolve in the upper layers of Jupiter, fueled by sunlight. You could have sky plankton: small organisms he called “sinkers.” Other organisms could be balloon-like “floaters,” which would rise and fall in the atmosphere by manipulating their body pressure. In the years since, astronomers have also considered the prospects of microbes in the carbon dioxide atmosphere above Venus’s inhospitable surface.

Yates and his colleagues applied the same thinking to a kind of world Sagan didn’t know about. Discovered in 2011, some cold brown dwarfs have surfaces roughly at room temperature or below; lower layers would be downright comfortable. In March 2013, astronomers discovered WISE 0855-0714, a brown dwarf only seven light years away that seems to have water clouds in its atmosphere. Yates and his colleagues set out to update Sagan’s calculations and to identify the sizes, densities, and life strategies of microbes that could manage to stay aloft in the habitable region of an enormous atmosphere of predominantly hydrogen gas. Sink too low and you are cooked or crushed. Rise too high and you might freeze.

On such a world, small sinkers like the microbes in Earth’s atmosphere or even smaller would have a better chance than Sagan’s floaters, the researchers will report in an upcoming issue of the Astrophysical Journal. But a lot depends on the weather: if upwelling winds are powerful on free-floating brown dwarfs, as seems to be true in the bands of gas giants like Jupiter and Saturn, heavier creatures can carve out a niche. In the absence of sunlight, they could feed on chemical nutrients. Observations of cold brown dwarf atmospheres reveal most of the ingredients Earth life depends on: carbon, hydrogen, nitrogen, and oxygen, though perhaps not phosphorous.

The idea is speculative but worth considering, says Duncan Forgan, an astrobiologist at the University of St. Andrews in the United Kingdom, who did not participate in the study but says he is close to the team. “It really opens up the field in terms of the number of objects that we might then think, well, these are habitable regions.”

So far, only a few dozen cold brown dwarfs have been discovered, though statistics suggest there should be about ten within thirty light-years of Earth. These should be ripe targets for the James Webb Space Telescope (JWST), which is sensitive in the infrared where brown dwarfs shine brightest. After it launches in 2018, JWST should reveal the weather and the composition of their atmospheres, says Jackie Faherty, an astronomer at the Carnegie Institution for Science in Washington, D.C. “We’re going to start getting gorgeous spectra of these objects,” she says. “This is making me think about it.”

Testing for life would require anticipating a strong spectral signature of microbe byproducts like methane or oxygen, and then differentiating it from other processes, Faherty says. Another issue would be explaining how life could arise in an environment that lacks the water-rock interfaces, like hydrothermal vents, where life is thought to have begun on Earth. Perhaps life could develop through chemical reactions on the surfaces of dust grains in the brown dwarf’s atmosphere, or perhaps it gained a foothold after arriving as a hitchhiker on an asteroid. “Having little microbes that float in and out of a brown dwarf atmosphere is great,” Forgan says. “But you’ve got to get them there first.”