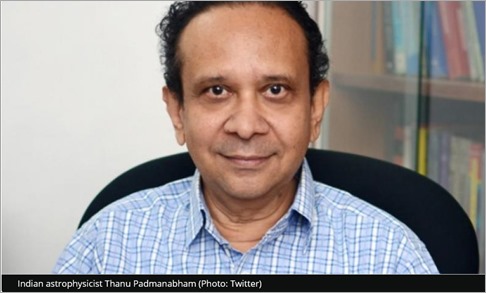 David Wiltshire has gifted a decorative lamp worth $200 to Thanu Padmanabham.

An Indian astrophysicist, named Thanu Padmanabham, who extended Albert Einstein’s theory on Dark Energy has won a 10-year-old bet with a New Zealand-based astrophysicist who had challenged him for the theory.

On December 1, the New Zealand astrophysicist, David Wiltshire, from the University of Canterbury, announced that he had conceded the wager to India’s astrophysicist Thanu Padmanabham on the nature of dark energy.

During a planetary talk on December 15, 2006 at the t an international physics symposium in Australia in 2006, Padmanabham challenged the audience stating that in the next ten years there will be no evidence to contradict the hypothesis that dark energy (cosmological constant) is the root cause of accelerated expansion of the universe. That is, dark energy is a mathematical term called the "cosmological constant" that Einstein had initially proposed in his equations, but abandoned.

It was Witlshire who accepted the challenge to disproof Padmanabham’s dark energy theory.

Dark energy was discovered in late 1990s by observing distant exploding stars that are said to push everything in the universe away from everything else. Studies suggest that Dark matter makes up about 72 per cent of the all the matter-energy in the universe, while the visible- matter in the universe including stars, planet and galaxies make up only 4 per cent.

Over the past decade, Padmanabham continued with his calculations, and four years ago Padmanabham with his daughter co-authored a paper in which they derived the numerical value of the cosmological constant.

Under the written terms of the wager, Wiltshire has gifted a decorative lamp worth $200, whose colour output can be altered using a mobile app, to Padmanabham.