Planets Forming In The Rings Around A Young Star? 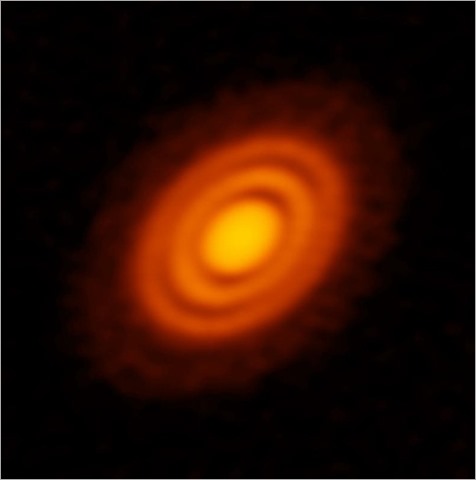 As our ability to observe the universe, both near and far in space and time, has grown, astronomers have seen some wonderful things that have helped our understanding of the cosmos. And while we have seen things as brilliant as the birth of stars, we haven’t ever observed the formation of planets.

In fact, it is only in the last two decades that we have been able to find planets outside the solar system, even though we have known for much longer that exoplanets exist. It was difficult to find planets because they don’t have any light of their own, and therefore seeing the process of a planet’s formation, usually shielded by the overbearing light from its parent star, is almost impossible to observe.

LEFT: An ALMA image of the star HD 163296 and its protoplanetary disk as seen in dust. Photo: ALMA (ESO/NAOJ/NRAO)/Andrea Isella/B. Saxton (NRAO/AUI/NSF)

But astronomers from Rice University think they have observed the formation of two planets that orbit HD 163296, a young star (less than 10 million years old, compared to the sun which is about 5 billion years old) roughly twice as massive as the sun and located about 400 light-years away.

Being a star of the Herbig Ae variety, HD 163296 has a circumstellar disk that is made up of gases and dust. Led by Andrea Isella, the Rice astronomers mapped the gases in three dark rings around the star in its surrounding disk.

“Of the material that formed this disk, about 1 percent is dust particles and 99 percent is gas,” Isella said in a statement. “So if you only see the dust, you cannot tell if a ring was formed by a planet or another phenomenon. In order to distinguish and really tell if there are planets or not, you need to see what the gas is doing, and in this study, for the first time, we can see both the dust and the gas.”

The researchers think outer two rings, at distances of 100 and 160 astronomical units (AUs, which is about 150 million kilometres, the distance between the sun and Earth) were created as planets formed at those distances, gathering all the dust and gas in their paths as they formed. They are thought to be gas giants with masses similar to Saturn. The inner ring, at a distance of 60 AUs from the star, however, is not thought to contain a planet — owing to a much higher concentration of carbon monoxide isotopes than the other two rings — and is currently not explained by the researchers.

“The inner gap is mysterious. Whatever is creating the structure is removing the dust but there’s still a lot of gas,” Isella said.