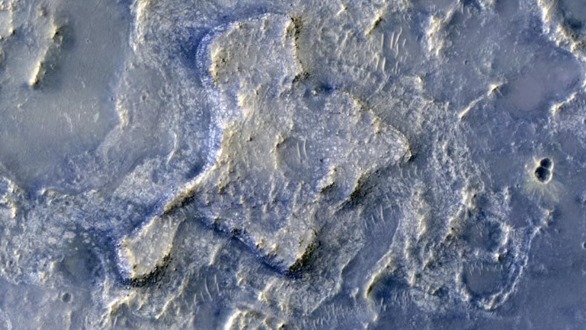 Brown University researchers have published the most detailed geological history to date for a region of Mars known as Northeast Syrtis Major, a spot high on NASA's list of potential landing sites for its next Mars rover to be launched in 2020.

The region is home to a striking mineral diversity, including deposits that indicate a variety of past environments that could have hosted life. Using the highest resolution images available from NASA's Mars Reconnaissance Orbiter, the study maps the extent of those key mineral deposits across the surface and places them within the region's larger geological context.

"When we look at this in high resolution, we can see complicated geomorphic patterns and a diversity of minerals at the surface that I think is unlike anything we've ever seen on Mars," said Mike Bramble, a Ph.D. student at Brown who led the study, which is published in the journal Icarus. "Within a few kilometres, there's a huge spectrum of things you can see and they change very quickly."

If NASA ultimately decides to land at Northeast Syrtis, the work would help in providing a roadmap for the rover's journey.

"This is a foundational paper for considering this part of the planet as a potential landing site for the Mars 2020 rover," said Jack Mustard, a professor in Brown's Department of Earth, Environmental and Planetary Sciences and a co-author on the paper. "This represents an exceptional amount of work on Mike's part, really going into the key morphologic and spectroscopic datasets we need in order to understand what this region can tell us about the history of Mars if we explore it with a rover."

Northeast Syrtis sits between two giant Martian landforms—an impact crater 2,000 kilometres in diameter called the Isidis Basin, and a large volcano called Syrtis Major. The impact basin formed about 3.96 billion years ago, while lava flow from the volcano came later, about 3.7 billion years ago. Northeast Syrtis preserves the geological activity that occurred in the 250 million years between those two events. Billions of years of erosion, mostly from winds howling across the region into the Isidis lowlands, have exposed that history on the surface.

Within Northeast Syrtis are the mineral signatures of four distinct types of watery and potentially habitable past environments. Those minerals had been detected by prior research, but the new map shows in detail how they are distributed within the region's larger geological context. That helps constrain the mechanisms that may have formed them, and shows when they formed
relative to each other. 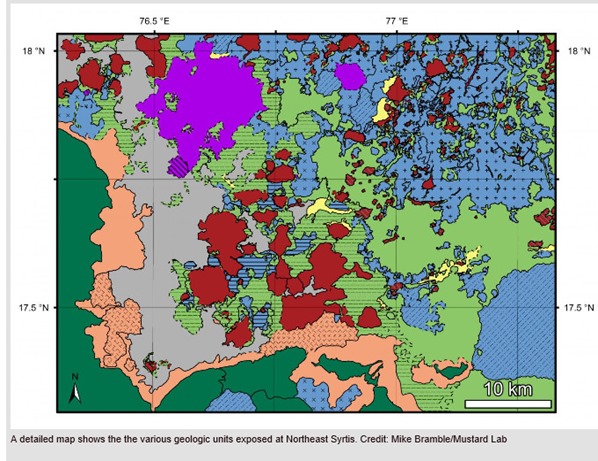 The lowest and the oldest layer exposed at Northeast Syrtis has the kind of clay minerals formed when rocks interact with water that has a fairly neutral pH. Next in the sequence are rocks containing kaolinite, a mineral formed by water percolating through soil. The next layer up contains spots where the mineral olivine has been altered to carbonate—an aqueous reaction that, on Earth, is known to provide chemical energy for bacterial colonies. The upper layers contain sulphate minerals, another sign of a watery, potentially life-sustaining environment.

Understanding the relative timing of these environments is critical, Mustard says. They occurred around the transition between the Noachian and Hesperian epochs—a time of profound environmental change on Mars.

"We know that these environments existed near this major pivot point in Mars history, and in mapping their context we know what came first, what came next and what came last," Mustard said. "So now if we're able to go there with a rover, we can sample rock on either side of that pivot point, which could help us understand the changes that occurred at that time, and test different hypotheses for the possibility of past life."

And finding signs of past life is the primary mission of the Mars2020 rover. NASA has held three workshops in which scientists debated the merits of various landing targets for the rover.

Mustard and Bramble have led the charge for Northeast Syrtis, which has come out near the top of the list at each workshop. Last February, NASA announced that the site is one of the final three under consideration.

Mustard and Bramble hope this latest work might inform NASA's decision, and ultimately help in planning the Mars2020 mission.

"As we turn our eyes to the next target for in situ exploration on the Martian surface," the researchers conclude, "no location offers better access of the gamut of geological processes active at Mars than Northeast Syrtis Major."