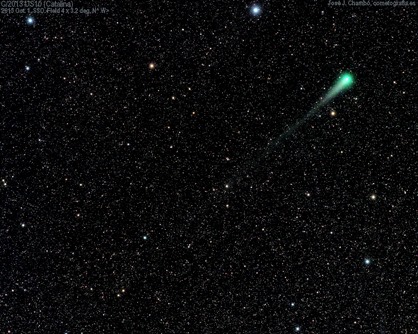 Today Catalina is at perihelion (closest approach to the Sun) at a distance of 76.5 million miles from the Sun. At perihelion, it will have a velocity of 75 miles/s (104,000 mph) with respect to the Sun which is slightly greater than the Sun's escape velocity at that distance. It crosses the celestial equator on 17 December 2015 becoming a northern hemisphere object. On 17 January 2016 the comet will pass 67,000,000 miles from Earth and could still be around magnitude 5 while located in the constellation of Ursa Major.

Solar activity is quiet now so the solar wind should not effect Catalina. Its Magnitude was steadily brightening up through September 2015, then slowed as some form of disruption occurred on the comet. Here is a graph from Seiichi Yoshida’s website which indicates that maximum brightness (Mag +5) is expected about 28 February. On this date comet Catalina lies in the constellation Camelopardalis 11.25 degrees to the left of Alpha Persei (Mirphac).