December 2015 Visibility of the bright planets 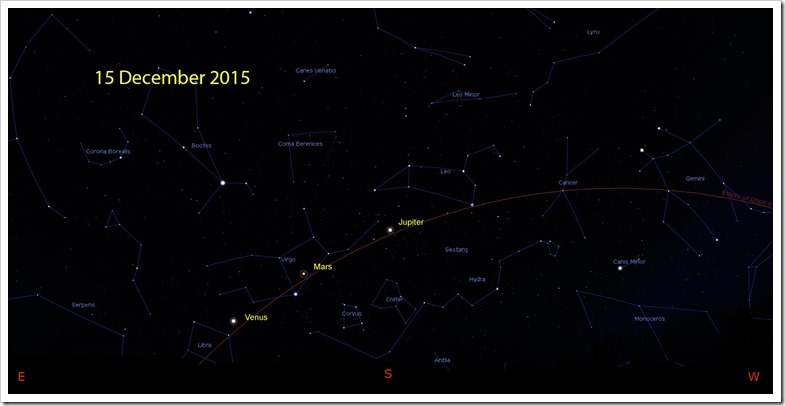 At the beginning of December Venus lies about 5 degrees above and to the left of Spica, the brightest star in Virgo (The Virgin). Shining at mag -4.2 it cannot be mistaken as it is so brilliant.

Venus is the second planet in order of distance from the Sun, inside the Earth's orbit, so that it shows a series of phases just like our moon. Even a small telescope will show the the phases of Venus.

The time of Dichotomy (half phase) occurred on 26 November 2015, so that the planet is now moving away from the Earth towards Superior Conjunction (Full phase) which will be on 6 January 2016.

The angular size of Venus during this period changes from 17 arc seconds at the beginning of December 2015, to 15 arc seconds at Superior conjunction when the planet is at the far side of it's orbital path around the Sun.

Venus is therefore getting lower & lower in the SE sky, moving into the adjacent constellation of Libra (The scales) on 11 December 2015 towards invisibility in the daytime sky.

The planet Mars at magnitude +1.5 lies in the constellation of Virgo. At the beginning of December it can be found a little below the lovely double star Gamma Virginis which is about a magnitude fainter.

Through the telescope Mars presently shows a rather small orange disk 4.8 arc seconds in diameter, so a medium size telescope of at least 6 inches is needed to show it, and a scope twice this size to be able to do useful work.

Mars is the fourth planet out from the Sun, and is presently 18.3 million miles distant. The planet is moving along its celestial path towards opposition in May 2016, and is moving closer to us all the time, so by the end of January 2016 the Mars will be only 15 million miles away. It's angular diameter will then have increased to 7 arc seconds.

Mars remains in Virgo during this time, moving about 4 degrees above Spica on Christmas Eve, and moves into Libra on 18 January 2016.

The Giant planet Jupiter is of great interest to amateur astronomers at the present time as it slowly moves towards opposition on 8 March 2016. Jupiter at magnitude -2 shines with a yellow hue so again it cannot be mistaken.

The planet lies on the boarder of Leo and Virgo, although it remains in Leo during much the 2016. To the ancients the principal planets were known as wondering stars since they moved along there celestial path through the constellations of the zodiac. That is to say, the planets move, while stars do not due to vast stellar distance of the stars.

Jupiter is about to perform a slow loop among the stars of Leo. The planet continues to move SE until it becomes stationary on 8 January 2016, then moves westwards through opposition next March until the planet again becomes stationary on 9 May 2016. Jupiter once again moves eastwards along its celestial path for the rest of next year.

The four bright Galilean Moon's of Jupiter, Io, Europa, Ganymede & Calisto can easily be seen with binoculars as they move around the planet, changing there positions each day. Jupiter itself displays such a large angular diameter of 36 arc seconds at the beginning of December 2015, and over 44 arc seconds at opposition, that even a small telescope is enough to show the planet's horizontal cloud bands. The two equatorial belt bands of cloud can be seen easily.

The most famous feature on Jupiter is the Great Red Spot which can be glimpsed with a 6 inch reflector or 3 inch telescope. There are many keen amateurs who carefully time when the spot transits across Jupiter's central meridian, and determine the spots' position with reasonable accuracy. It presently has a System II longitude of 238º and because we know that Jupiter's day is about 10h 55m long we can work out when the Great Red Spot can best be seen twice each day. Here is a link to projectpluto.com which gives the best times to see it.