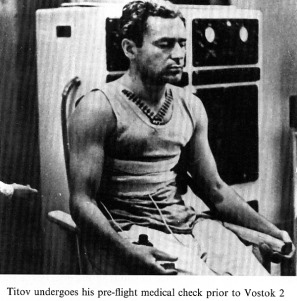 Titov was in his flight cabin at 09:30 hours and waited for the planned lift-off at 11:00 hours Baikonur time. Vostok 2 was inserted into a 64.9° inclination orbit, with an apogee of 232 km (144 miles). Soon afterwards, Titov began to feel sick, as weightlessness impaired the otolithic functions of his inner ear. His nausea became quite uncomfortable and meant that several experiments planned for the 24-hour mission could not be operated. The cosmonaut did, however, manage to sleep and found it quite disconcerting to wake with his arms outstretched, almost touching the controls. He later operated those same controls to perform manual changes to the spacecraft's orientation, using the attitude control system thrusters. Despite all this, however, he enjoyed the view through a porthole which magnified the Earth.

Vostok 2's descent module also did not separate cleanly from the retro section but the connections were finally severed to allow a safe entry. Titov became the first cosmonaut officially to land separately from his spacecraft, as Gagarin's planned exit had remained a secret to ensure that the pioneering Vostok flight could enter the international record books. The relatively enormous leap from Gagarin's flight to a 24-hour flight for Vostok 2 was dictated by the need to land in the prime recovery zone, which was overflown only every 16-17 orbits, or 24 hours.