The JUICE (JUpiter ICy moons Explorer) was selected in May 2012 as the first Large-class mission within ESA's Cosmic Vision 2015–25 programme, and is planned for launch in 2022 to arrive at the giant planet in 2030. 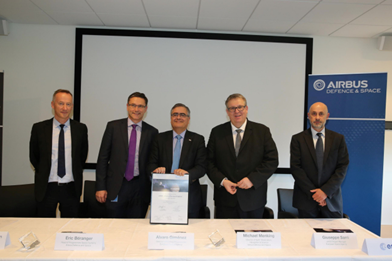 The Jupiter Icy Moons Explorer (JUICE), ESA’s first large-class mission within the Cosmic Vision Program 2015-2025, was formally adopted in November 2014. The overarching theme for JUICE is the emergence of habitable worlds around gas giants. The mission will perform detailed investigations of Jupiter and its system with particular emphasis on Ganymede as a planetary body and potential habitat. At Ganymede, the mission will characterize in detail the ocean layers; provide topographical, geological and compositional mapping of the surface; study the physical properties of the icy crust; characterize the internal mass distribution, investigate the exosphere; study Ganymede’s intrinsic magnetic field and its interactions with the Jovian magnetosphere. For Europa, the focus will be on the non-ice chemistry, understanding the formation of surface features and subsurface sounding of the icy crust over recently active regions. Callisto will be explored as a witness to the bombardment history of the early solar system.