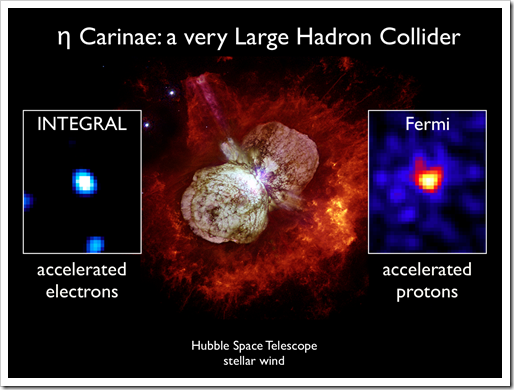 ETA (η) Carinae is the colliding wind binary with the highest mass-loss rate in our Galaxy and the only one in which hard X-ray emission has been detected.

η Carinae is therefore a primary candidate to search for particle acceleration by probing its gamma-ray emission.

A bright gamma-ray source is detected at the position of η Carinae. Its flux at a few 100 MeV can be modelled by an extrapolation of the hard X-ray spectrum towards higher energies. The spectral energy distribution features two distinct components. The first one extends from the keV to GeV energy range, and features an exponential cut-off at ∼ 1 GeV. It can be understood as inverse Compton scattering of ultraviolet photons by electrons accelerated up to γ ∼ 10**4 in the colliding wind region. The expected synchrotron emission is compatible with the existing upper limit to the non-thermal radio emission. The second component is a hard gamma-ray tail detected above 20 GeV. It could be explained by π0 -decay of accelerated hadrons interacting with the dense stellar wind. The ratio of the fluxes of the π0 to inverse Compton components is roughly as predicted by simulations of colliding wind binaries. This hard gamma-ray tail can only be understood if emitted close to the wind collision region. The energy transferred to the accelerated particles (∼ 5% of the collision mechanical energy) is comparable to that of the thermal X-ray emission.

The electron spectrum responsible for the keV to GeV emission was modelled and the observed emission above 20 GeV strongly suggests hadronic acceleration in η Carinae. These observations are thus in good agreement with the colliding wind scenario proposed for η Carinae.

Composite image shows portraits of the massive star system Eta Carinae as seen in low-energy gamma rays (left), visible light (middle) and high-energy gamma rays (right). The highest energy gamma rays are believed to be generated when protons accelerated in the star system’s winds collide with charged atoms in the wind, in something like a scaled-up version of the Large Hadron Collider.
Credits: ISDC/Walter, NASA, Fermi, INTEGRAL