The Star of Bethlehem

Some planetary conjunctions can be a wonderful sight. On the morning of 9 January 2016 Venus will be just 1 degree south of Saturn in the dawn sky; something to look forward too. There have been others previously of course, and there will be actual planetary Occultations to come.
So with the four bright planets Venus, Mars and Jupiter on view in the morning sky, its inevitable that the Sky at Night team, Prof. Chris Lintott and Dr Maggie Aderin-Pocock should make a program about the ‘Star of Bethlehem.’ The program will not be broadcast until 27 December, and there will be no program in January due to BBC Stargazing Live, so the program will not return in until mid March 2016.
This program from the BBC archives takes a look at all the evidence for the cause of ‘The Star of Bethlehem.’ 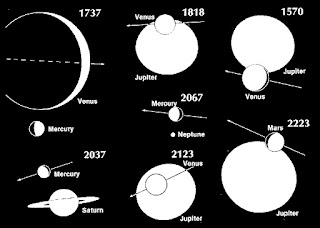 There was a triple conjunction of Jupiter and Saturn in 146 -145 BC, in Cancer. There are no surviving observations of it, but it must have been interesting to watch. The closest approach took place on 18 October 146 BC when the two were separated by 11 minutes of arc, which is around one-third the apparent diameter of the full Moon. The next approach, on 10 December, brought the two within 15 minutes of arc of each other; during the third, on 4 May BC 145, they were a mere 10 minutes of arc apart - nearly, though not quite, close enough for the two to fuse into one object from the viewpoint of the naked-eye observer.


David Hugh's notes that during the triple conjunction of 7 BC, the only one which falls within our ‘star of Bethlehem’ period, the two planets were in Pisces, the Fishes. On 27 May 7 BC, they were one degree from each other, so that they were well separated. Then they moved apart, to approach each other again during October; on the 6th of that month they were again one degree apart. Another separation, and a final approach on 7 December, again at a range of just over one degree. After that they moved apart relatively quickly.
It is evident that this triple conjunction was less spectacular than that of 145 BC, and in fact it was not spectacular at all. Jupiter is always brilliant, but Saturn was more or less at its faintest, with a magnitude of+0.5, slightly inferior to the star Procyon in Canis Minor (the Little Dog) and two whole magnitudes fainter than Sirius.
Posted by RichardP at 13:59