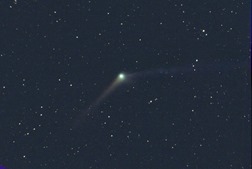 2013 US10 (Catalina) may be at its brightest in early January, having continued to approach the Earth after perihelion in 2015 November. It is well placed, reaching within 10° of Polaris at the end of January, though by then it is fading rapidly. It passes just over a degree from 9th magnitude globular NGC 5466 over January 5/6; two degrees from galaxy M101 over January 15/16 and is close to open cluster NGC 1502 on February 22/23. 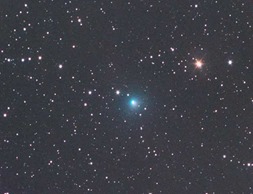 9P/Tempel was first observed in 1867, but was lost between 1879 and 1967 following an encounter with Jupiter in 1881, which increased the perihelion distance from 1.8 to 2.1 au. Further encounters in 1941 and 1953 put q back to 1.5 au and calculations by Brian Marsden allowed Elizabeth Roemer to recover it in 1967. Alternate returns are favourable, but an encounter with Jupiter in 2024 will once again increase the perihelion distance to 1.8 au. It was the target for the Deep Impact mission, with the Stardust spacecraft subsequently passing by the comet. The comet could come into visual range in March, and remains visible for UK observers until June. It could be at its brightest around 11th magnitude in early July, when it passes south of the celestial equator, and Southern Hemisphere observers will be able to follow it as it fades. 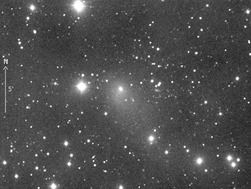 29P/Schwassmann-Wachmann is an annual comet that has outbursts, which over the last decade seem to have become more frequent. The comet had one of its strongest outbursts yet recorded in early 2010. Richard Miles has developed a theory that suggests that these outbursts are in fact periodic, and arise from at least four independent active areas on the slowly rotating nucleus. The activity of the active areas evolves with time. The comet is an ideal target for those equipped with CCDs and it should be observed at every opportunity. The comet is at a southern declination, reaching opposition in Scorpius in June and passing through solar conjunction at the end of December. 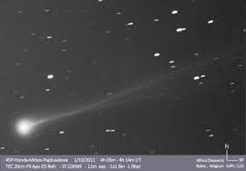 45P/Honda-Mrkos-Pajdusakova has had several close encounters with Jupiter, the most recent in 1983 which made dramatic changes to ω and Ω. The perihelion distance has steadily decreased and is close to the smallest it has been for the last 200 years, though is now increasing again. It can approach quite closely to the Earth and did so at the last return in 2011 (0.06 au) and is on its way to another close approach post perihelion, in 2017 (0.08 au). At present the MPC only lists eight approaches closer than 0.06 au out of 20 passes closer than 0.1 au, and nine of these are by five periodic comets. It can also pass close to Venus and passed at 0.085 au in 2006, getting even closer in 2092. The comet brightens rapidly in November, but it is well south of the celestial equator. For northern observers there may be a short period when it might be visible at the close of the year, when it is at perihelion and perhaps 7th magnitude.

252P/LINEAR is an earth approaching comet and makes a very close approach on March 21 when it passes 0.036 au from our planet. This is the fifth closest cometary approach on record, and it is by virtue of this that this otherwise faint comet might come within visual range for a few weeks. It races north after closest approach, and for northern observers there is an observing window of about a week from March 30 when it might be seen, as the peak magnitude is predicted at 10 and it fades very quickly. 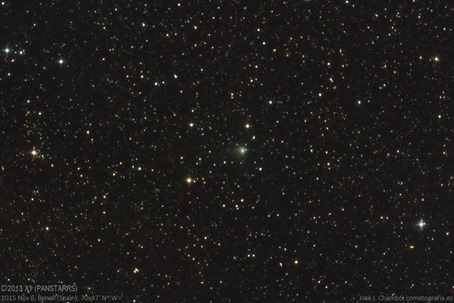 2013 X1 (PanSTARRS) could be 10th magnitude at the beginning of the year and well placed in the evening sky for northern hemisphere observers. It is rapidly moving south however, and after mid February will be lost to view. After solar conjunction Southern Hemisphere observers will be able to observe it from around April until September, with the comet brightest at around 7th magnitude in June.