Northern sky mapped in the light of Neutral Hydrogen 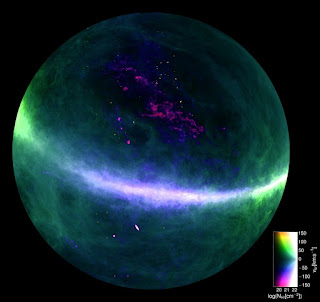 Radio astronomers from Bonn University and the Max-Planck-institute fur Radio astronomy have reached a scientific milestone with their publication in the January issue of the international science journal Astronomy & Astrophysics.
One of the world's largest fully steerable radio telescopes, the Effelsberg 100-m dish, sun/eyed the entire northern sky in the light of the neutral hydrogen (HI) 21-cm line. This effort, led by Jurgen Kerp (Argelander Institute for Astronomy) and Benjamin Winkel (Max Planck-institute fur Radio astronomy), began in 2008 and has culminated today in the initial data release of the Effelsberg-Bonn HI Survey (EBHIS). Funded by the German Research Foundation (Deutsche Forschungsgemeinschaft - DFG), the EBHIS data base is now freely accessible for all scientists around the world. In addition to the now released Milky Way data, the EBHIS project also includes unique information about HI in external galaxies out to a distance of about 750 million light years from Earth. Hydrogen is THE ELEMENT of the universe. Consisting of a single proton and an electron it is the simplest and most abundant element in space.
One could almost consider the universe as a pure hydrogen universe, albeit with some minor "pollution" by heavier elements, among these carbon, the fundamental component of all organisms on Earth. The 21-cm line is a very faint but characteristic emission line of neutral atomic hydrogen (or HI). It is not only feasible to detect the weakest signals from distant galaxies with the 100-m Effelsberg antenna, but also to determine their motion relative to Earth with high precision.
A special receiver was required in order to enable the EBHIS project. With seven receiving elements observing the sky independently from each other, it was possible to reduce the necessary observing time from decades to about five years only.
Field Programmable Gate Array (FPGA) spectrometers were developed within the course of the EBHIS project, allowing real time processing and storage of about 100 million individual HI spectra with consistently good quality.
The individual HI spectra were combined using high-performance computers into a unique map of the entire northern sky and provide unsurpassed richness in detail of the Milky Way Galaxy gas.
Astronomy students at Bonn University had unique access to the pre-release EBHIS data. In 2013 the European Space Agency (ESA) signed a memorandum of understanding with the Bonn HI radio astronomers. ESA was granted exclusive access to EBHIS data for their Planck satellite mission and, in return, Bonn students were given unique access to Planck data for their thesis projects. Twelve Bachelor, nine Master, and five Doctoral thesis projects have been successfully completed since 2008.
Posted by RichardP at 12:22