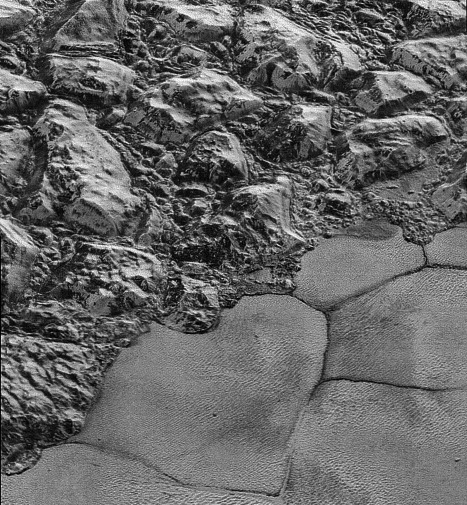 In this highest-resolution image from NASA’s New Horizons spacecraft, great blocks of Pluto’s water-ice crust appear jammed together in the informally named al-Idrisi mountains. Some mountain sides appear coated in dark material, while other sides are bright. Several sheer faces appear to show crustal layering, perhaps related to the layers seen in some of Pluto’s crater walls. Other materials appear crushed between the mountains, as if these great blocks of water ice, some standing as much as 1.5 miles high, were jostled back and forth. The mountains end abruptly at the shoreline of the informally named Sputnik Planum, where the soft, nitrogen-rich ices of the plain form a nearly level surface, broken only by the fine trace work of striking, cellular boundaries and the textured surface of the plain’s ices (which is possibly related to sunlight-driven ice sublimation). This view is about 50 miles wide. The top of the image is to Pluto’s northwest.