Are you ready for the Transit of Mercury? 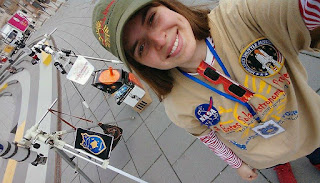 A few days ago I was having a chat with my friend Pranvera Hyseni in Kosovo. She and her outreach team are doing such great work in the townships in the country as part of the Charlie Bates Solar Astronomy Project, by giving local people the opportunity to view the Sun safely through  telescopes and safety glasses.
Pranvera was saying just how much she and her team were looking forward to the next Transit of Mercury that will take place on 9 May 2016, and how excited she and her team were to see the planet Mercury pass across the face of the Sun during the course of the afternoon.
This transit will be seen by observers in much of eastern S. America, E. America, Canada, Europe and NE. Africa. 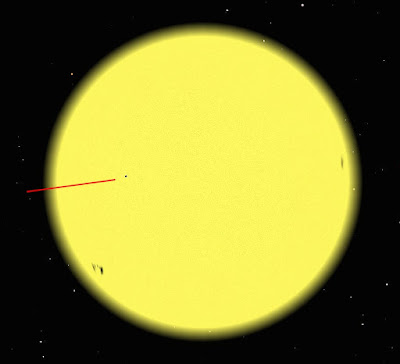 The very first Transit of Mercury was seen in Europe 389 years ago, and its place in history is assured. It occurred on the 7th of November, 1631. In a dissertation published at Leipsic, Germany, in 1629, Johannes Kepler notified to astronomers that according to his calculations a transit must occur on this day, since at the time of conjunction he had found the latitude of Mercury by his tables less than the Sun's semi-diameter. This interesting prediction was verified by Gassendi, at Paris. He discovered the planet on the disc of the Sun shortly before nine o'clock in the morning. At first he thought it was a sunspot which had not been re­marked on the preceding day, but continuing his observations, its motion was soon detected, and he saw the planet leave the Sun's disc on the western limb about 10.30 am. It was found that Kepler's tables represented the circumstances with far greater precision than even the author himself had hoped for.
The second observation of a transit of Mercury was made by Jeremiah Shakerley.  Shakerley was the son of William Shakerley of North Owram, Halifax, in England. On the morning of the 3d of Novem­ber, 1651, at Surat, in the East Indies. It is said Shakerley was so desirous of witnessing the phenomenon that, having found by his calculations it would be invisible in England, he made the voyage to India for the purpose.
The third recorded transit was observed at Dantzic by the celebrated astronomer, Hevelius, on the 3d of May, 1661. He saw the planet on the Sun's disc for 4½ hours.
The next transit took place on the 7th of November, 1677, and was witnessed by Edmund Halley, at St. Helena, and by M. Gallet, at Avignon. Halley thought the times of ingress and egress might be observed within a single second of time, and pointed out how the Sun's parallax might be ascertained from such observations, taken at places widely distant from one another, remarking, however, that the difference of the par­allaxes would not be large enough to give very certain results.
A transit of Mercury occurred on November 10, 1690, and was observed in China by the Jesuit missionaries, at Erfurt by Oodfrey Kirch, and at Nuremberg by Wurzelbaur. Another in 1697, on November 3, was witnessed by astronomers at Paris, and other places. One on the ninth of November, 1723, when watched at Paris, Genoa, Bologna and Padua, but the first complete European observation of a transit of Mercury bears the date November 11, 1736, when nearly all the astronomers of the time observed the planet in its progress across the Sun. The transit of 1802, November 9, was seen by the well-known Jerome de Lalande, who was the more interested in it, inasmuch as he remarks it was the last he could hope to witness. That of 1832, May 5, was visible in the UK, though a general prevalence of unfavourable weather occasioned much disappointment. The next occurred on the 7th of November, 1835, but was not visible in Europe. Another on 1845, May 8, was partially observed in the UK, and also that of, November 8, 1848, which is the 25th that has occurred since the phenomenon was first noted by Gassendi.
Pranvera Hyseni has good reason to be 'excited, by the next Transit of Mercury, since she will be following in the footsteps of such great astronomers as Hevelius, Johannes Kepler and Sir Isaac Newton on this great occasion. The rest of us amateur astronomers should be just as excited, and looking forward to this very special event. After this Transit you will have to wait until 20 November 2019 for the next to occur, so please make a note in your diary.
Richard Pearson