Build your own Extremely Large Telescope 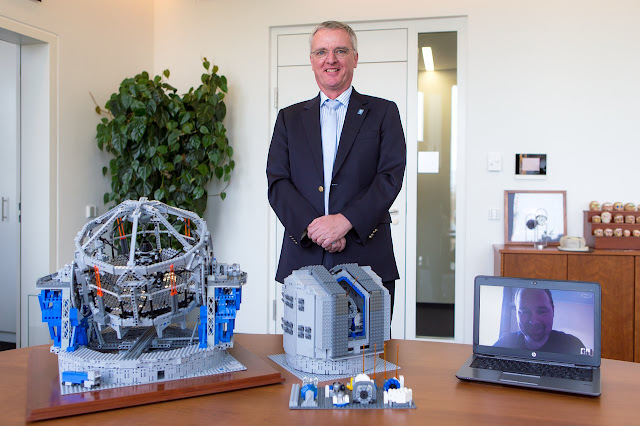 Dutch astronomer Frans Snik has designed a model of ESO’s European Extremely Large Telescope (E-ELT) using LEGO® components. Following on from the success of that design (more than ten models have been built by enthusiastic individuals worldwide since it was published), Snik has now dedicated some of his spare time to designing a LEGO® model of one of the Unit Telescopes that make up ESO’s Very Large Telescope (VLT).
For almost 20 years now, the VLT has been amazing astronomers with its extraordinary capabilities. One of the largest telescope facilities in the world, the VLT consists of four independent telescopes that can be operated together to make a very powerful facility. Now ESO is building its big brother, the ELT, that will extend our reach even further into the heavens. You may not be able to build your own full-size versions of these telescopes, but the models are a convincing, and much more practical, substitute — and they are an excellent way to understand how complex modern astronomical instruments work.

Snik used the design tools ldraw and bricksmith to build his new model of the VLT, as he did for the E-ELT model. The VLT requires exactly 3104 parts, all of which can — with some care and attention — be ordered from various LEGO® providers through bricklink. The scale of the model is approximately 1:150, just the same as the E-ELT model, and the total cost of the parts is about 500–550 euros, depending on which instruments are included. The model comprises the telescope and the entire dome structure, and all of the instruments used on the real VLT can be built. It rotates and all the dome shutters and vents open and close.
Not only can you use Snik’s design plans to build your own versions of these two iconic telescopes, but you can now vote for them to be produced and sold by LEGO® as complete kits by visiting the LEGO® Ideas website. Keen LEGO®-builders with an interest in astronomy will surely want to vote for these models. Once 10 000 votes are received for a design, LEGO® undertake to consider it for production as a kit.
For now, anyone wanting to build their own version of either (or both!) of these huge telescopes can download the detailed construction manuals (for the VLT, and for the E-ELT) and lists of bricks needed (for the VLT, and for the E-ELT). Even expert builders will need to invest some time to build one of the biggest telescopes in the world as it takes at least a few days to order the parts and piece each model together. But the final product will certainly make the effort worthwhile!
The first VLT model built by Snik was donated to ESO’s Director General Tim de Zeeuw, to stand in his office alongside the earlier model of the E-ELT. Both the LEGO® VLT and the E-ELT will be on display in the forthcoming ESO Supernova Planetarium & Visitor Centre at the ESO Headquarters in Garching, Germany from 2017.
Posted by RichardP at 18:49