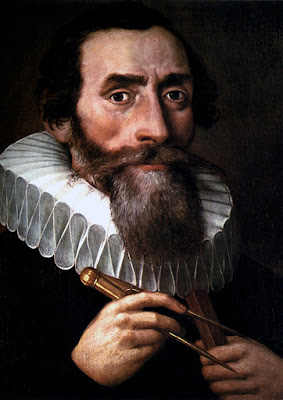 Johannes Kepler was born in 1571 at Weil der Stadt in Wurttemberg. His mother Frau Kepler had occult leanings and must have looked exactly like a witch. In fact, at a later stage she was actually accused of witchcraft, and Johannes had a great deal of trouble in securing her acquittal.
However, Frau Kepler did one good deed. In 1577 she took her son outdoors to show him a bright comet (the one which Tycho Brahe saw), and from that moment on the boy was enth­ralled by astronomy.
In 1589 he arrived at the University of Tubingen to study theology. It was here that he became a convinced Copernican, and he was quite open about his views. In 1596 he wrote a book which contained some good ideas, plus a great deal of fantasy; for example he believed that each planet must have a "sphere" or band in space in which it was always to be found, and that these must touch each other, so that they could be linked with the five regular solids of geometry!
Please click on the images to enlarge﻿ 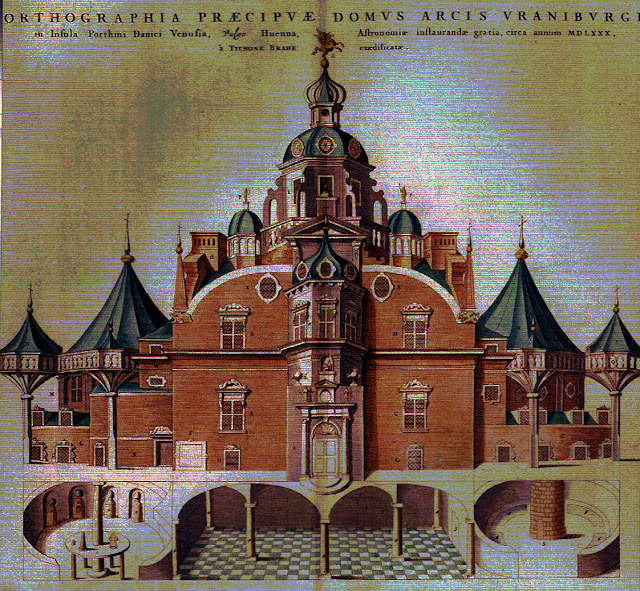 Fortunately Tycho, in Prague, read the book and liked it. He invited Kepler to join him, and Kepler did so. On Tycho's death Kepler replaced him as Imperial Mathematician, and inherited all the Hven observations, though not without opposition from some of Tycho's family.


Kepler set out to give a final solution of the problem of the planetary motions. He had total faith in Tycho's observations, but for a long time he could not make the positions of the planets fit in with any theory. Finally he realized the truth. The planets do indeed move around the Sun—but they do so not in circles, but in ellipses. From this he was led on to draw up his three Laws of Planetary Motion, which are as follows:


1. A planet moves round the Sun in an elliptical orbit. The Sun occupies one focus of the ellipse while the other focus is empty.


2. The radius vector—the imaginary line joining the centre of the planet' to the centre of the Sun—sweeps out equal areas in equal times. (This means that a planet. or for that matter a comet, moves fastest when closest to the Sun, and slowest when furthest away.)


3. The cubes of the mean dis­tances of the planets of the Sun are proportional to the squares of their revolution periods (so that if you know the period, which is easy to find by obser­vation. you can also find the distance compared with that of the Earth. A complete model of the Solar System can be drawn up, and if one absolute value is known all the rest will follow.)


Law 3 is rather more complex. Essentially, it means that there is a definite relationship between a planet's sidereal period - that is to say, the time taken for it to go once round the Sun - and its mean distance from the Sun. This has proved to be very import­ant in measuring the length of the astronomical unit, or Earth- Sun distance. 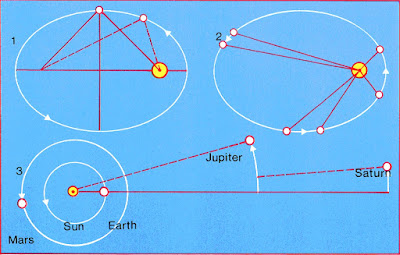 What was done, in the 1960s, was to make an actual measure of the real distance of the planet Venus. Of course, the sidereal periods of both Venus and the Earth were already known very accurately, and in Kepler's relationship the only remaining unknown was the distance between the Earth and the Sun. We now know it to have a mean value of 92,957,000 miles. The measures were made by means of the latest radar techniques; radar pulses were bounced off Venus, and the time-lag between the transmission of the pulse and the reception of the "echo" pro­vided all the information for working out the distance of the planet. Radar is strictly a twentieth-century development, but the method was based on Kepler's Laws of 350 years earlier!


The first two Laws were published in 1609, and the third in 1618 in a book called Harmony the World, which was the unusual Mixture of brilliant science and outdated mysticism. Kepler also prepared a new set of planetary tables, which appeared in 1628—long after the Emperor Rudolphine had been deposed, but which Kepler called the Rudolphine Tables.


He died in 1630 while on a journey to try to collect some of the overdue wages owed to him.
Posted by RichardP at 21:28