The Anniversary of Stellar Specroscopy

William Huggins and his Spectroscopes 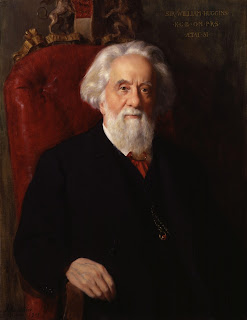 This is a memorable 'anniversary day'. On 7 February 1824 William Huggins was born. He was never a professional astronomer; he had to enter the family drapery business, and it was only when he was able to retire from the firm that he was able to devote his whole time to astronomy.
He set up an observatory at Tulse Hill, in outer London, and concentrated on astronomical spectroscopy. A spectroscope splits up light, and a normal star produces a rainbow band crossed by dark lines, each of which is the trade­mark of some particular element or group of elements. Huggins found that the stars could be divided into definite types according to their colours; a red star showed a spectrum very different from that of a white star - so that, for example, the orange Pollux has a spectrum which is easily distinguished from that of a white star such as Castor. Similar work was being carried out in Italy by the Jesuit astronomer Angelo Secchi, and the stars were put into four distinct classes (the more detailed Harvard classification system came much later):
I                       White or bluish stars, with broad, dark spectral lines due to hydrogen. Example: Sirius.
II                     Yellow stars; hydrogen lines less prominent, but more evidence of lines due to metals. Examples: Capella, the Sun.
III                    Orange stars, with complicated banded spectra. Example: Betelgeux.
IV                    Red stars, with prominent lines due to carbon. All were below magnitude 5, and many of them were found to be variable. R Cygni in the Swan was a good example.

What about the nebulas? Some, such as the Great Nebula in Andromeda, seemed to be made up of stars, but others, such as the nebula in Orion's Sword, looked more like patches of gas. Huggins knew that he could find out. The spectrum of a shining gas at low pressure does not yield a rainbow; instead, it produces isolated bright lines. When Huggins examined nebulae such as Orion's Sword, he saw only bright lines - and this proved that the nebulae themselves were indeed gaseous. On the other hand, the spectra of'starry nebulae' proved to be made up of the combined spectra of many millions of stars. We now know that they are galaxies in their own right, far beyond the Milky Way.
William Huggins died on 12 May 1910 at the age of 86.
Posted by RichardP at 00:17