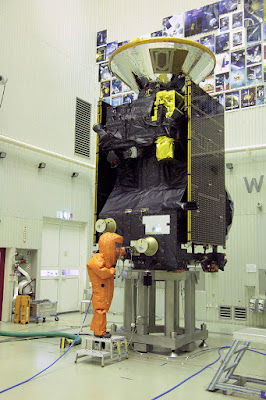 I will have a great new program for April all about Mars, 'the red planet.'

I am on the look out for images taken by amateur astronomers this season that I may use in the program.

We also take a look at the European Space Agency's new Mars probe.

The ExoMars 2016 Trace Gas Orbiter being fuelled at the Baikonur cosmodrome in Kazakhstan.
In March, Europe’s new era of Mars exploration begins with the launch of the Trace Gas Orbiter (TGO) and Schiaparelli. After a seven-month journey through space, Schiaparelli will separate from the orbiter on 16 October and head towards the planet’s surface, where it will land three days later, on Meridiani Planum.
Meanwhile, the orbiter will begin to manoeuvre into orbit and, after a year of aerobraking, will begin science operations.
Any long journey requires an ample supply of fuel and, 21 February, fuelling of TGO began. This spacecraft has one fuel tank and one oxidiser tank, each with a capacity of 1207 litres. When fuelling is complete, the tanks will contain about 1.5 tonnes of MON (mixed oxides of nitrogen) and 1 tonne of MMH (monomethylhydrazine).
The propellant is needed for the main engine and the 10 thrusters (plus 10 backup thrusters) that are used for fine targeting and critical manoeuvres.
Even the propellants have had a long journey: both were procured via Gerling Holz in Germany, brought by ship to St Petersburg in Russia, and then by train to the cosmodrome, in Kazakhstan.
Since fuelling is a hazardous exercise, only essential staff – wearing protective suits – are allowed in the fuelling area. A team from Thales Alenia Space France is in Baikonur to take care of TGO fuelling, as they did for Schiaparelli. While this activity is under way, the fire brigade, doctor, security and safety officers are on hand.

If you have taken images of the red planet, and will kindly allow me to include them in the program (C) water marked, with your name also included in the credits at the end of the show; please send them to myself at:

Thank you for your valuable help everyone
Posted by RichardP at 12:27