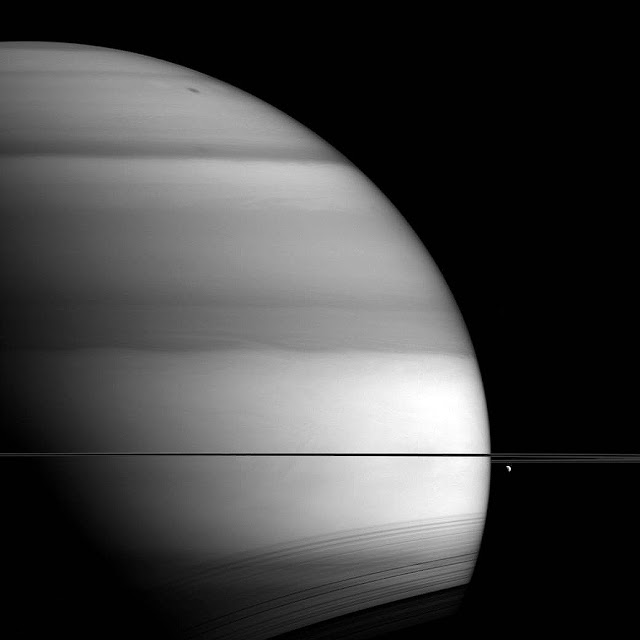 The soft, bright-and-dark bands displayed by Saturn in this view from NASA's Cassini spacecraft are the signature of methane in the planet's atmosphere.

This image was taken in wavelengths of light that are absorbed by methane on Saturn. Dark areas are regions where light travels deeper into the atmosphere (passing through more methane) before reflecting and scattering off of clouds and then heading back out of the atmosphere. In such images, the deeper the light goes, the more of it gets absorbed by methane, and the darker that part of Saturn appears.

The moon Dione (698 miles or 1,123 kilometers across) hangs below the rings at right. Shadows of the rings are also visible here, cast onto the planet's southern hemisphere, in an inverse view compared to early in Cassini's mission at Saturn.

This view looks toward the unilluminated side of the rings from about 0.3 degrees below the ringplane. The image was taken with the Cassini spacecraft wide-angle camera on Sept. 6, 2015, using a spectral filter which preferentially admits wavelengths of near-infrared light centered at 728 nanometers.

The view was acquired at a distance of approximately 819,000 miles (1.32 million kilometers) from Saturn. Image scale is 49 miles (79 kilometers) per pixel. Dione has been brightened by a factor of two to enhance its visibility.

The Cassini mission is a cooperative project of NASA, ESA (the European Space Agency) and the Italian Space Agency. The Jet Propulsion Laboratory, a division of the California Institute of Technology in Pasadena, manages the mission for NASA's Science Mission Directorate, Washington. The Cassini orbiter and its two onboard cameras were designed, developed and assembled at JPL. The imaging operations center is based at the Space Science Institute in Boulder, Colorado.