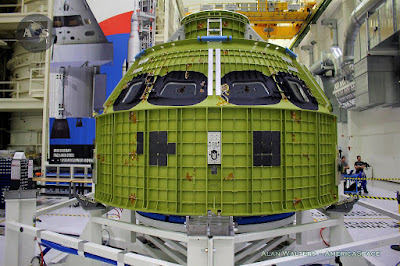 NASA’s Orion crew module pressure vessel is secured on a test stand called “the birdcage” inside the Neil Armstrong Operations and Checkout (O&C) Building high bay at NASA’s Kennedy Space Center (KSC) in Florida. The pressure vessel makes up the underlying structure of the Orion crew module, which will be used for the agency’s unmanned Exploration Mission (EM)-1 flight in 2018. On this mission, the spacecraft will travel significantly farther and spend a much longer duration in space than the previous Exploration Flight Test (EFT)- 1 mission that took place in December 2014.
“This vehicle will go further than any of the Apollo spacecraft has ever went,” said Mark Geyer, John Space Center (JSC) deputy director and former Orion program manager. “It’s the beginning of this architecture, SLS and Orion, to enable us to explore the lunar regions and encounter things like a habitation module, visit asteroids, and then eventually go on to Mars. All a part of leading exploration and the United States being a leader in that.” 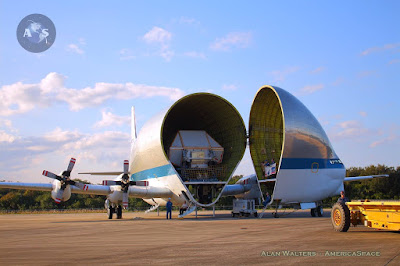 NASA’s Super Guppy aircraft transported Orion’s completed structure from the agency’s Michoud Assembly Facility in New Orleans (where it was welded together) to KSC’s Landing Facility on Feb. 1. The structure is the foundation on which all of the spacecraft’s systems and subsystems are going to be built and integrated to provide a sealed environment for astronauts to survive.
In order to prepare this particular spacecraft for the rigorous EM-1 mission, Orion will first undergo a series of tests to ensure it is structurally sound before spending the next 18 months getting outfitted with its necessary flight systems and subsystems, including its heat-shielding thermal protection system, before being shipped to NASA’s Plum Brook Station in Ohio to undergo a series of thermal vacuum tests prior to EM-1. More than 100,000 components will be integrated with the spacecraft by the Orion team at KSC.
More than 500 GB of data was gained from the EFT-1 flight to aid engineers with Lockheed Martin in constructing the first SLS Orion to fly, and one major change is the build of the primary structure itself now at KSC. Engineers reduced the number of welds for the crew module by more than half, and fewer welds means an overall lighter spacecraft (700 pounds).
According to NASA, the first crew module structure that was built and used for engineering tests and evaluations required 33 weld operations. The number of welds required for the Orion structure that flew EFT-1 was reduced to 19, and further innovations have reduced the welds to 15 for the EM-1 spacecraft.
Seven large aluminum pieces were cleaned, coated with a protective chemical, and primed to protect from corrosion before each element was outfitted with strain gauges and wiring to monitor the metal during the fabrication process. Each piece was then inspected and evaluated to ensure meeting precise design requirements before being welded together using a state-of-the-art process called friction-stir welding, which produces very strong bonds by transforming metals from a solid into a plastic-like state, and then using a rotating pin tool to soften, stir and forge a bond between two metal components to form a uniform welded joint.
The EM-1 spacecraft may be destined to fly the furthest mission of a human-rated vehicle in history, but it isn’t the first Orion to be built. In 2010, the first Orion flew on Pad Abort (PA)-1 to demonstrate the Launch Abort System (LAS). In 2014, the second Orion flew on NASA’S EFT-1 mission and took Orion 3,600 miles above Earth’s surface (roughly 15 times higher than the International Space Station) for a 4.5-hour orbital flight test. On EM-1, Orion will launch aboard the inaugural flight of the agency’s Space Launch System (SLS) rocket and travel nearly 40,000 thousand miles beyond the orbit of the Moon on a three-week mission to prove out the entire flight system before strapping astronauts onboard in the first half of the next decade.
Orion must be able to withstand high velocities and re-entry temperatures when coming back from beyond low-Earth orbit, bringing with it temperatures and velocities not seen by a crewed vehicle since moonshot days of Apollo. Orion will experience speeds as fast as 24,545 mph (39,501 km/h), or 36,000 feet per second, as the spacecraft makes its return from lunar velocity during EM-1. To put that in perspective, during EFT-1, Orion experienced a fiery re-entry at 20,000 mph (32,000 km/h), or 30,000 feet per second. At that speed temperatures soared as high as 2,200 degrees Celsius (4,000 degrees Fahrenheit) around the spacecraft, and for this reason Orion’s new thermal protection system was forced to evolve from the EFT-1 flight article.
While EFT-1’s heat shield surpassed expectations, changes were necessary for the actual deep-space missions. NASA and Lockheed Martin added a 3-D woven thermal protection fabric soon after EFT-1, designed to fit between Orion and the service module. Six “quartz” compression pads will serve to absorb shock during launch and spaceflight operations; during reentry, the material will serve as an ablative thermal protection system.
A more effective way of building the heat shield was also proposed. Orion’s outer heat shield surface will consist of 180 blocks, versus having it fabricated in one single, massive piece. The spacecraft’s back shell will be covered with a silvery, metallic thermal control coating, which will not only reduce heat loss in deep space, but will also limit high temperature exposure to the crew.
“The heat shield we put to the test during Orion’s flight test last December met every expectation we had and gave us a tremendous amount of data on its thermal and mechanical performance,” said Mark Kirasich, Acting Orion Program Manager. “But the process of building the heat shield as a single piece for that flight also gave us insight into how we could improve the way we build this essential element of the spacecraft.”
By Talia Landman
Posted by RichardP at 21:06