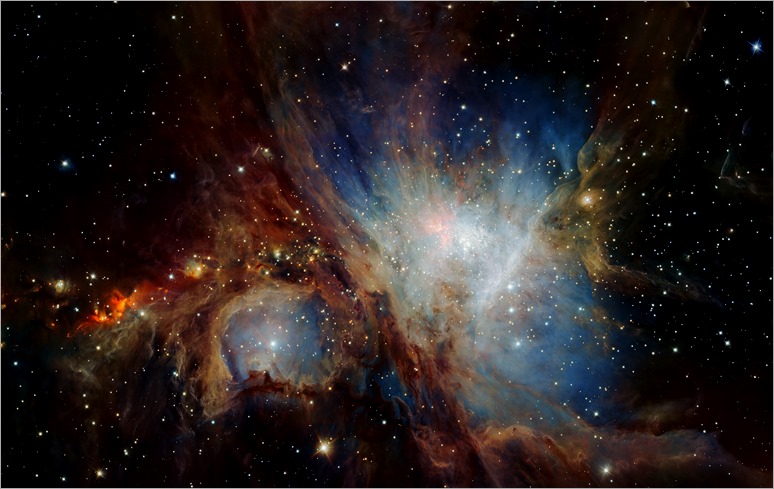 An international team has made use of the power of the HAWK-I infrared instrument on ESO’s Very Large Telescope (VLT) in Chile to produce the deepest and most comprehensive view of the Orion Nebula to date. Not only has this led to an image of spectacular beauty, but it has revealed a great abundance of faint brown dwarfs and isolated planetary-mass objects. The very presence of these low-mass bodies provides an exciting insight into the history of star formation within the nebula itself.

The famous Orion Nebula spans about 24 light-years within the constellation of Orion, and is visible from Earth with the naked eye, as a fuzzy patch in Orion’s sword. Some nebulae, like Orion, are strongly illuminated by ultraviolet radiation from the many hot stars born within them, such that the gas is ionised and glows brightly.

The relative proximity of the Orion Nebula makes it an ideal test bed to better understand the process and history of star formation, and to determine how many stars of different masses form.

Accounting for the contamination of background stars and galaxies, the team found that Orion Nebula Cloud’s Initial Mass Function is bimodal with distinct peaks at about 0.25 and 0:025M separated by a pronounced dip at the hydrogen burning limit (0.08M ), with a depth of about a factor 2–3 below the log-normal distribution. Apart from 920 low mass stars (M < 1:4M ) the IMF contains 760 brown dwarf candidates and 160 isolated planetary mass object candidates with M > 0:005M , hence about ten times more sub-stellar candidates than known before. The sub-stellar IMF peak at 0.025M could be caused by Brown Dwarfs and Isolated Planetary Mass Objects which have been ejected from multiple systems during the early star-formation process or from circumstellar disks.

Amelia Bayo (Universidad de Valparaíso, Valparaíso, Chile; Max-Planck Institute für Astronomie, Königstuhl, Germany), a co-author of the new paper and member of the research team, explains why this is important: "Understanding how many low-mass objects are found in the Orion Nebula is very important to constrain current theories of star formation. We now realise that the way these very low-mass objects form depends on their environment."

This new image has caused excitement because it reveals a unexpected wealth of very-low-mass objects, which in turn suggests that the Orion Nebula may be forming proportionally far more low-mass objects than closer and less active star formation regions. 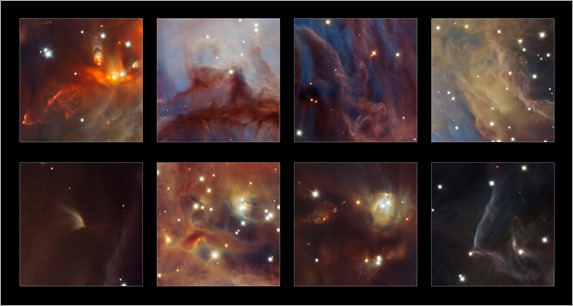 Astronomers count up how many objects of different masses form in regions like the Orion Nebula to try to understand the star-formation process. Before this research the greatest number of objects were found with masses of about one quarter that of our Sun. The discovery of a plethora of new objects with masses far lower than this in the Orion Nebula has now created a second maximum at a much lower mass in the distribution of star counts.

These observations also hint tantalisingly that the number of planet-sized objects might be far greater than previously thought. Whilst the technology to readily observe these objects does not exist yet, ESO’s future European Extremely Large Telescope (E-ELT), scheduled to begin operations in 2024, is designed to pursue this as one of its goals.

Lead scientist Holger Drass (Astronomisches Institute, Ruhr-Universität Bochum, Bochum, Germany; Pontificia Universidad Católica de Chile, Santiago, Chile) enthuses: “Our result feels to me like a glimpse into a new era of planet and star formation science. The huge number of free-floating planets at our current observational limit is giving me hope that we will discover a wealth of smaller Earth-sized planets with the E-ELT.