Where on Mars Does Carbon Dioxide Frost Form Often? 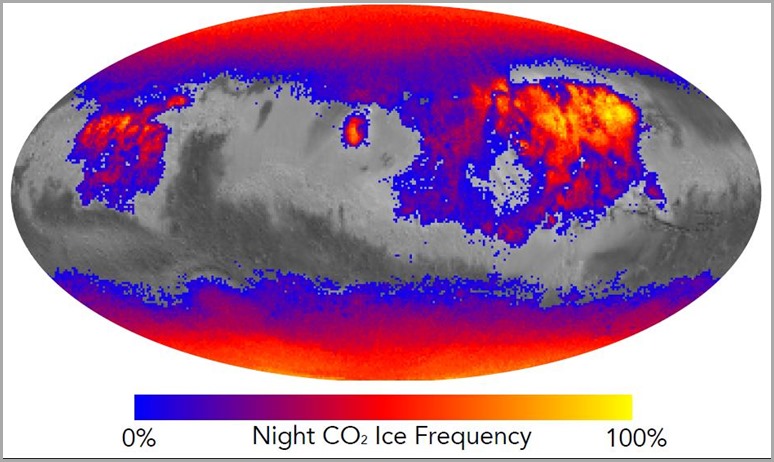 ON MARS the Autumn Equinox was on 4 July, so day & night are about equal over the planet while the autumn season has just begun

Water on Mars H2O is associated with the polar ice caps which is also the place to find Carbon Dioxide ice, so it comes as no surprise these latest finding confirm. What is fascinating is that there are high levels of C02  over the volcanic Tharsis area, which is a vast volcanic plateau cantered near the equator in the western hemisphere of Mars. The region is home to the largest volcanoes in the Solar System, including the three enormous shield volcanoes Arsia Mons, Pavonis Mons, and Ascraeus Mons, which are collectively known as the Tharsis Montes.

There are also high levels of Carbon Dioxide in the Valles Marineris, which is a system of canyons that runs along the Martian surface east of the Tharsis region. 2,500 miles long, 120 miles wide and up to 23,000 feet deep.

This map shows the frequency of carbon dioxide frost's presence at sunrise on Mars, as a percentage of days year-round. Carbon dioxide ice more often covers the ground at night in some mid-latitude regions than in polar regions, where it is generally absent for much of summer and Autumn.

Colour coding is based on data from the Mars Climate Sounder instrument on NASA's Mars Reconnaissance Orbiter. A colour-key bar below the map shows how colours correspond to frequencies. Yellow indicates high frequencies, identifying areas where carbon dioxide ice is present on the ground at night during most of the year. Blue identifies areas where it is rarely present; red is intermediate. Areas without colour coding are regions where carbon dioxide frost is not detected at any time of year.

The areas with highest frequency of overnight carbon dioxide frost correspond to regions with surfaces of loose dust, which do not retain heat well, compared to rockier areas. Those areas also have some of the highest mid-afternoon temperatures on the planet. The dust surface heats up and cools off rapidly.

Six science instruments on the Mars Reconnaissance Orbiter have been examining Mars since 2006. NASA's Jet Propulsion Laboratory, a division of the Caltech in Pasadena, California, manages the mission for NASA's Science Mission Directorate in Washington and built the Mars Climate Sounder. Lockheed Martin Space Systems of Denver built the orbiter and operates it in collaboration with JPL.