Astronomers study the inside of rotating Black Holes 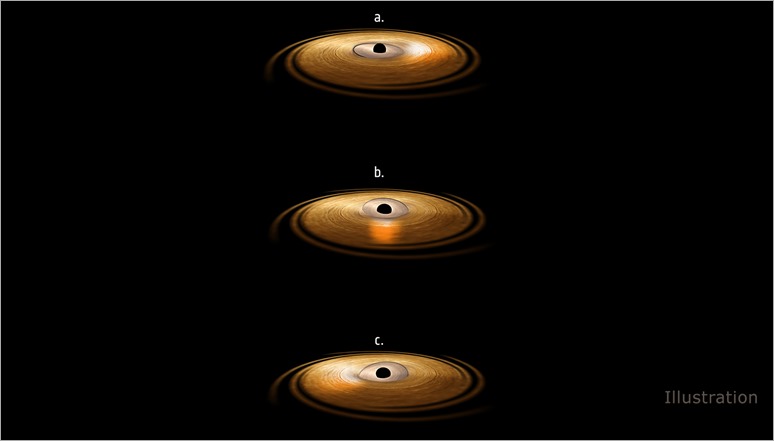 This artist's impression depicts the accretion disc surrounding a black hole, in which the inner region of the disc precesses. "Precession" means that the orbit of material surrounding the black hole changes orientation around the central object.

The European Space Agency's orbiting X-ray observatory, XMM-Newton, has proved the existence of a "gravitational vortex" around a black hole. The discovery, aided by NASA's Nuclear Spectroscopic Telescope Array (NuSTAR) mission, solves a mystery that has eluded astronomers for more than 30 years, and will allow them to map the behaviour of matter very close to black holes. It could also open the door to future investigations of Albert Einstein's general relativity.

Matter falling into a black hole heats up as it plunges to its doom. Before it passes into the black hole and is lost from view forever, it can reach millions of degrees. At that temperature it shines X-rays into space.

In the 1980s, pioneering astronomers using early X-ray telescopes discovered that the X-rays coming from stellar-mass black holes in our galaxy flicker. The changes follow a set pattern. When the flickering begins, the dimming and re-brightening can take 10 seconds to complete. As the days, weeks and then months progress, the period shortens until the oscillation takes place 10 times every second. Then, the flickering suddenly stops altogether.

The phenomenon was dubbed the Quasi Periodic Oscillation (QPO). "It was immediately recognized to be something fascinating because it is coming from something very close to a black hole," said Adam Ingram, University of Amsterdam, the Netherlands, who began working to understand QPOs for his doctoral thesis in 2009.

During the 1990s, astronomers had begun to suspect that the QPOs were associated with a gravitational effect predicted by Einstein's general relativity: that a spinning object will create a kind of gravitational vortex. 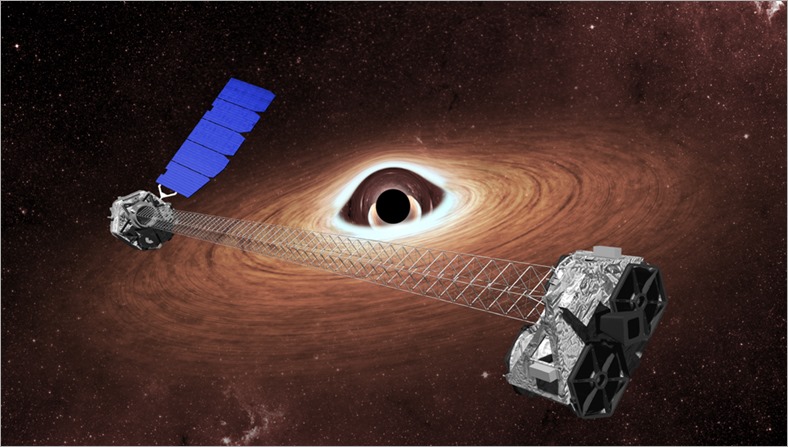 "It is a bit like twisting a spoon in honey. Imagine that the honey is space and anything embedded in the honey will be "dragged" around by the twisting spoon," explained Ingram.  "In reality, this means that anything orbiting a spinning object will have its motion affected." In the case of an inclined orbit, it will "precess." This means that the whole orbit will change orientation around the central object. The time for the orbit to return to its initial condition is known as a precession cycle.

In 2004, NASA launched Gravity Probe B to measure this so-called Lens-Thirring effect around Earth. After painstaking analysis, scientists confirmed that the spacecraft would turn through a complete precession cycle once every 33 million years.

Around a black hole, however, the effect would be much more noticeable because of the stronger gravitational field. The precession cycle would take just a matter of seconds or less to complete. This is so close to the periods of the QPOs that astronomers began to suspect a link.

Ingram began working on the problem by looking at what happened in the flat disc of matter surrounding a black hole. Known as an accretion disc, it is the place where material gradually spirals inwards towards the black hole. Scientists had already suggested that, close to the black hole, the flat accretion disc puffs up into a hot plasma, in which electrons are stripped from their host atoms. Termed the hot inner flow, it shrinks in size over weeks and months as it is eaten by the black hole. Together with colleagues, Ingram published a paper in 2009 suggesting that the QPO is driven by the Lens-Thirring precession of this hot flow. This is because the smaller the inner flow becomes, the closer to the black hole it would approach and so the faster its Lens-Thirring precession cycle would be. The question was: how to prove it?

"We have spent a lot of time trying to find smoking gun evidence for this behaviour," said Ingram.

The answer is that the inner flow is releasing high-energy radiation that strikes the matter in the surrounding accretion disc, making the iron atoms in the disc shine like a fluorescent light tube. The iron releases X-rays of a single wavelength -- referred to as "a spectral line."

Because the accretion disc is rotating, the iron line has its wavelength distorted by the Doppler effect. Line emission from the approaching side of the disc is squashed -- blue shifted -- and line emission from the receding disc material is stretched -- red shifted. If the inner flow really is precessing, it will sometimes shine on the approaching disc material and sometimes on the receding material, making the line wobble back and forth over the course of a precession cycle.

Seeing this wobbling is where XMM-Newton came in. Ingram and colleagues from Amsterdam, Cambridge, Southampton and Tokyo applied for a long-duration observation that would allow them to watch the QPO repeatedly. They chose black hole H 1743-322, which was exhibiting a four-second QPO at the time. They watched it for 260,000 seconds with XMM-Newton. They also observed it for 70,000 seconds with NASA's NuSTAR X-ray observatory.

"The high-energy capability of NuSTAR was very important," Ingram said. "NuSTAR confirmed the wobbling of the iron line, and additionally saw a feature in the spectrum called a 'reflection hump' that added evidence for precession."

After a rigorous analysis process of adding all the observational data together, they saw that the iron line was wobbling in accordance with the predictions of general relativity. "We are directly measuring the motion of matter in a strong gravitational field near to a black hole," says Ingram.

This is the first time that the Lens-Thirring effect has been measured in a strong gravitational field. The technique will allow astronomers to map matter in the inner regions of accretion discs around black holes. It also hints at a powerful new tool with which to test general relativity.

Einstein's theory is largely untested in such strong gravitational fields. So if astronomers can understand the physics of the matter that is flowing into the black hole, they can use it to test the predictions of general relativity as never before - but only if the movement of the matter in the accretion disc can be completely understood.

"If you can get to the bottom of the astrophysics, then you can really test the general relativity," says Ingram. A deviation from the predictions of general relativity would be welcomed by a lot of astronomers and physicists. It would be a concrete signal that a deeper theory of gravity exists.

Larger X-ray telescopes in the future could help in the search because they are more powerful and could more efficiently collect X-rays. This would allow astronomers to investigate the QPO phenomenon in more detail. But for now, astronomers can be content with having seen Einstein's gravity at play around a black hole.

"This is a major breakthrough since the study combines information about the timing and energy of X-ray photons to settle the 30-year debate around the origin of QPOs. The photon-collecting capability of XMM-Newton was instrumental in this work," said Norbert Schartel, ESA Project Scientist for XMM-Newton.