Magnetic reconnection on the Sun caught in the act

When two magnetic field lines connect and form a new one that “short-circuits” the magnetic field, one speaks of magnetic reconnection. These events can release large amounts of energy and play an important role in heating the upper layers of the solar atmosphere where they frequently occur. The direct observation of this phenomenon is difficult as reconnections occur on short time scales. Besides this, the structures that need to be observed are very small. An international team of researchers with participation from the Max Planck Institute for Solar System Research (MPS) now succeeded in in observing such a reconnection directly and in detail. With their results which appear today in the journal “Nature Physics” they confirm theoretical calculations.

Magnetic fields play a crucial role everywhere in the universe, be it during the formation of the first structures in the early universe, during star formation, or in activity cycles of the Sun and other stars. Often magnetic fields are visualized as strings connecting poles of opposite magnetic polarities. However, unlike strings magnetic field lines can reconnect and through this reconfigure the magnetic structure. This phenomenon is termed magnetic reconnection. During such a reconnection significant amounts of magnetic energy are converted into other forms of energy, e.g. into kinetic energy through particle acceleration of internal energy through heating. Theoretical models predict how magnetic reconnections should proceed in detail. However, a confirmation of the theory via observations proves to be difficult. Now a direct observation was made for the first time. 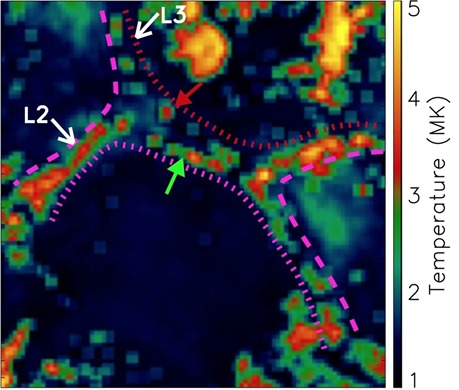 Temperature enhancements (shown as red and yellow colours) of the plasmids in the X-type reconnection region. The dashed and dotted lines indicate the location of the magnetic field lines forming the X-shaped reconnection regions. In the red regions the temperature rises to several million degrees. L2 and L3 point out the location of pre-existing coronal structures that eventually recombine. The field-of-view of the region corresponds to a side length of 90.000 km. The small regions with high temperatures near the green or red arrows have diameters of about 3000 km, I.e. they are bigger than Europe.

Through the release of energy magnetic reconnection is one of the key mechanisms for the heating of the outermost layer of the solar atmosphere, the so-called corona. For reasons not entirely understood, this layer is more than a million degrees hot, much hotter than layers below. To the naked eye the corona is only visible during a total solar eclipse. In the extreme ultraviolet it can be observed at all times with adequate instruments, for example with the Atmospheric Imaging Assembly (AIA) instrument on board the Solar Dynamics Observatory (SDO).

It was images taken by this satellite, together with magnetic field measurements provided by the Helioseismic and Magnetic Imager (HMI) – also on board SDO - that the researchers have analysed for their study. They found a particularly important variety of magnetic reconnection, the so-called X-type reconnection. In this variety, the field lines are arranged in an X-like shape for a short time.

"We see here a clear example of X-type reconnection on the Sun with all the details predicted by theory" says Hardi Peter from MPS. He worked on the interpretation of the data relating them to theory, and is particularly intrigued by the clearly visible plasmids. These are pockets that are isolated from their surroundings by the magnetic fields. "The magnetic field lines have the form of an X with an elongated line at the crossing of the X. Here we can see small islands of magnetic field where we see an enhanced temperature, just as theory predicts". While observers looked for these roundish enhancements of temperature, it was rare that hints for these were found and never with this clarity.

This observation confirms that hot plasmids play an important role in magnetic reconnections in the solar atmosphere. It also opens new aspects in the interpretation of other phenomena on the Sun. For example they support the theory according to which spectroscopic signatures in the smallest, unresolved structures could also be caused by plasmids.