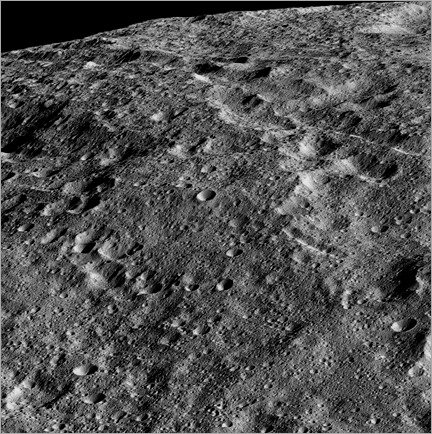 This image shows the limb of Ceres from above an equatorial region east of Kirnis Crater. The scene is cantered at approximately 10 degrees north latitude, 284 degrees east longitude.

NASA's Dawn spacecraft took this image on June 13, 2016, from its low-altitude mapping orbit, at a distance of about 240 miles (385 kilometres) above the surface. The image resolution is 120 feet (35 meters) per pixel.

The brightest area on Ceres, located in the mysterious Occator Crater, has the highest concentration of carbonate minerals ever seen outside Earth, according to a new study from scientists on NASA's Dawn mission. The study, published online in the journal Nature, is one of two new papers about the makeup of Ceres.

"This is the first time we see this kind of material elsewhere in the solar system in such a large amount," said Maria Cristina De Sanctis, lead author and principal investigator of Dawn's visible and infrared mapping spectrometer. De Sanctis is based at the National Institute of Astrophysics, Rome.

At about 80 million years old, Occator is considered a young crater. It is 57 miles (92 kilometres) wide, with a central pit about 6 miles (10 kilometres) wide. A dome structure at the centre, covered in highly reflective material, has radial and concentric fractures on and around it.

De Sanctis' study finds that the dominant mineral of this bright area is sodium carbonate, a kind of salt found on Earth in hydrothermal environments. This material appears to have come from inside Ceres, because an impacting asteroid could not have delivered it. The upwelling of this material suggests that temperatures inside Ceres are warmer than previously believed. Impact of an asteroid on Ceres may have helped bring this material up from below, but researchers think an internal process played a role as well.

More intriguingly, the results suggest that liquid water may have existed beneath the surface of Ceres in recent geological time. The salts could be remnants of an ocean, or localized bodies of water, that reached the surface and then froze millions of years ago.

"The minerals we have found at the Occator central bright area require alteration by water," De Sanctis said. "Carbonates support the idea that Ceres had interior hydrothermal activity, which pushed these materials to the surface within Occator." 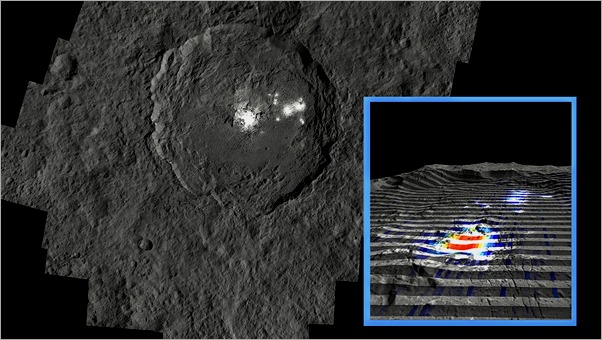 The spacecraft's visible and infrared mapping spectrometer examines how various wavelengths of sunlight are reflected by the surface of Ceres. This allows scientists to identify minerals that are likely producing those signals. The new results come from the infrared mapping component, which examines Ceres in wavelengths of light too long for the eye to see.

Last year, in a Nature study, De Sanctis' team reported that the surface of Ceres contains ammoniated phyllosilicates, or clays containing ammonia. Because ammonia is abundant in the outer solar system, this finding introduced the idea that Ceres may have formed near the orbit of Neptune and migrated inward. Alternatively, Ceres may have formed closer to its current position between Mars and Jupiter, but with material accumulated from the outer solar system.

The new results also find ammonia-bearing salts -- ammonium chloride and/or ammonium bicarbonate -- in Occator Crater. The carbonate finding further reinforces Ceres' connection with icy worlds in the outer solar system. Ammonia, in addition to sodium carbonate and sodium bicarbonate found at Occator, has been detected in the plumes of Enceladus, an icy moon of Saturn known for its geysers erupting from fissures in its surface. Such materials make Ceres interesting for the study of astrobiology.

"We will need to research whether Ceres' many other bright areas also contain these carbonates," De Sanctis said.

A separate Nature study in 2015 by scientists with the Dawn framing camera team hypothesized that the bright areas contain a different kind of salt: magnesium sulphate. But the new findings suggest sodium carbonate is the more likely constituent.

"It's amazing how much we have been able to learn about Ceres' interior from Dawn's observations of chemical and geophysical properties. We expect more such discoveries as we mine this treasure trove of data," said Carol Raymond, deputy principal investigator for the Dawn mission, based at NASA's Jet Propulsion Laboratory, Pasadena, California.

Dawn science team members have also published a new study about the makeup of the outer layer of Ceres in Nature Geoscience, based on images from Dawn's framing camera. This study, led by Michael Bland of the U.S. Geological Survey, Flagstaff, Arizona, finds that most of Ceres' largest craters are more than 1 mile (2 kilometres) deep relative to surrounding terrain, meaning they have not deformed much over billions of years. These significant depths suggest that Ceres' subsurface is no more than 40 percent ice by volume, and the rest may be a mixture of rock and low-density materials such as salts or chemical compounds called clathrates. The appearance of a few shallow craters suggests that there could be variations in ice and rock content in the subsurface.