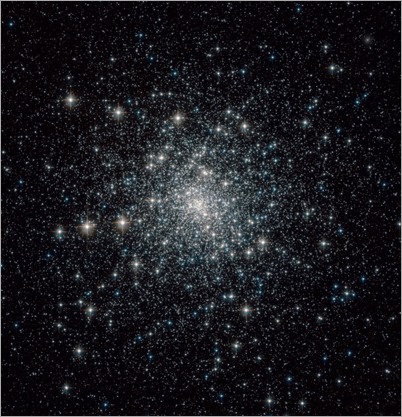 THE BRIGHT Mag +6.2 globular cluster Messier 2 lies in the constellation of Aquarius at Right ascension 21h 33m 27.02s Declination –00° 49′ 23.7″ and is a favourite among Astrophotographers as it is relatively easy to photograph. 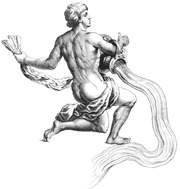 A team of astronomers led by P.B. Kuzma from the Research School of Astronomy and Astrophysics, Australian National University, Canberra, Australia, have now studied M2 in great detail, and conclude that M2 likely formed inside a dwarf galaxy that was later accreted into the Milky Way halo and destroyed.

“We have searched the region surrounding the Milky Way globular cluster M2 for the presence of low surface brightness substructures, using deep wide field imaging mosaics from MegaCam and DECam. We use the observed colour magnitude diagram to identify likely cluster members across the respective fields of view, and that a composite radial surface density profile indicates substantial extra-tidal populations extending well beyond the literature value for the tidal radius of 12:50 arc minutes. These remote M2 populations entirely ll our 0.8 x 0.8 degree MegaCam mosaic, and it is only with a 13 square degree mosaic from DECam that we are able to identify a diffuse, extended envelope surrounding the cluster to a radial distance of at least 60 arc minutes ( 210 pc), five times larger than the nominal tidal radius. Our two-dimensional density map reveals the envelope to be mildly elliptical, with e = 0:11 0:06 and the major axis oriented at a position angle of = 69 degrees east of north. There is no evidence for a distinct stellar stream or tidal tails, although we identify a small but statistically significant over-density of M2 stars beyond the apparent edge of the envelope, that follows a potential axis extending from north-east to south-west in broad agreement with the orientation of the envelope. 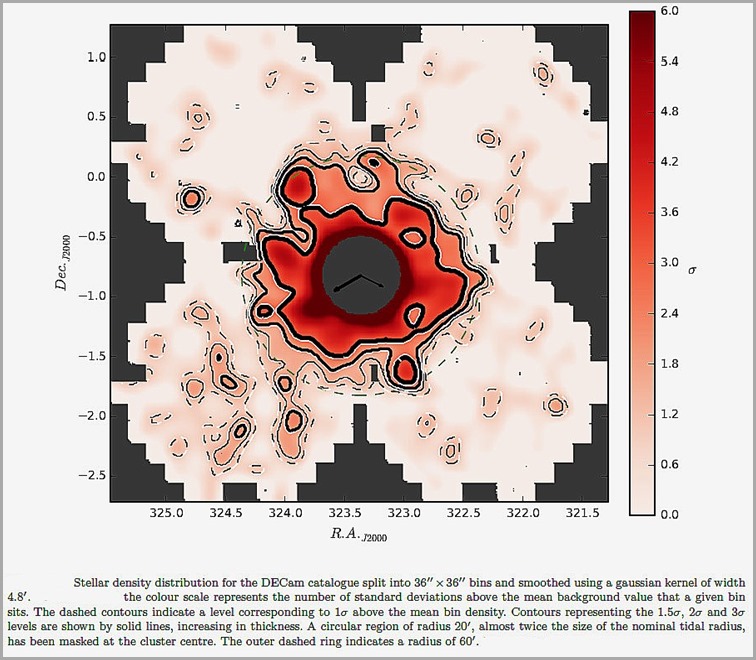 The nature and origin of the diffuse envelope surrounding M2 is not well understood. One possibility is that this structure is due to the dynamical evolution of the cluster, although how external factors such as tidal shocking might give rise to such an envelope, as opposed to the distinct tidal tails observed around disrupting globular clusters and seen in numerical simulations, is not clear. Numerous globular clusters have been found with power-law extended without tidal tails, though none of these studies have a found an envelope to the size of, or exhibiting a profile a shallow as, M2. An alternative scenario is that M2 was originally formed in a dwarf galaxy that was later accreted into the Milky Way halo and destroyed { in this case the envelope might constitute the final remaining vestiges of the host. A similar structure has been observed to surround the globular cluster NGC 1851, and simulations of this system have shown that the nucleus of a dwarf galaxy can possess a halo-like structure surrounding the dense core long after the majority of the original dwarf and its dark matter halo have been stripped away and lost. In this context it is intriguing that M2 is a member of a small group of massive Milky Way globular clusters (also including NGC 1851) observed to exhibit internal dispersions in both iron abundance and s-process elements. Deeper imaging of the region around M2, together with spectroscopic velocity and abundance measurements of stars in the envelope, will be required to understand the origin of this structure with greater certainty.”