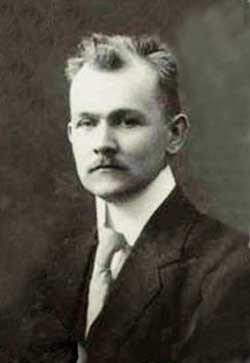 Today keen amateur astronomers enjoy photographing the glorious deep sky objects, or taking breath taking guided images of the constellations. They spend many hours processing there nights work before posting them in main stream groups on Face Book for others to see and appreciate.
Taking images through large reflector telescopes is hampered by the limited field of view, so in days gone by carrying out all sky surveys would take years to complete. What was needed is a kind of telescope that can photograph large areas of the sky in one single image.


Such a telescope was designed and constructed by Estonian Born astronomer Bernhard Schmidt.


Bernhard Schmidt is one of the more curious characters in the history of astronomy. He was what we nowadays call a "loner"; he disliked working with a team, and he was always moody and unpredictable.


He was born on the island of Naissaar in 1879. (At that time Estonia, as now, was controlled by the Russians.) Schmidt's family was poor, and the boy had little formal schooling. But he was always interested in science, and he was an enthusiastic experimenter. His first telescope lens was made by taking an ordinary bottle, cutting out its bottom, and using sand to grind it into the correct optical shape.


When he was 21 he went to the Institute of Technology at Gothenburg, in Sweden, to study engineering; he next moved on to Mittweida in Germany, and after graduating he stayed there, making mirrors and lenses for telescopes. He was exceptionally skilful, and in 1905 produced a first-class 15-inch mirror for the Potsdam Observatory. He continued his work, mainly on his own. Until 1926, when Schorr. Director of the Hamburg Observatory invited him to join the staff. Schmidt accepted, but he still preferred working alone, and he was never an easy man to know.


His major contribution came during his period at Hamburg. The main trouble about photographing the sky with an ordinary telescope is that the field of view is small, and it takes many exposures to cover even a limited area. Schmidt found the remedy. He used a spherical mirror, and combined it with a special glass plate, fixed in the upper part of the telescope tube, to correct the errors caused by the spherical shape of the mirror. These "Schmidt telescopes" (or Schmidt cameras) made it possible to photograph wide areas of the sky with a single plate, with the definition remaining sharp right up to the edge of the field.


Mt. Palomar is famous for being the home of the 200 inch Hale reflector, once the largest telescope in the world. 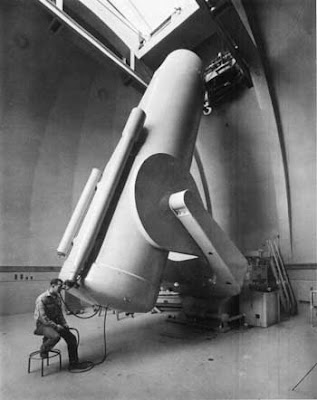 Palomar Observatory’s 48-inch Schmidt Telescope is one of the most productive survey telescopes ever built with a dozen completed surveys since the 1950s. The wide-field imaging capabilities of this telescope (it has a usable field roughly 1000 times larger than that of the 200-inch Hale Telescope) makes it ideal for conducting systematic surveys of the sky. It currently operates robotically, scanning the skies nightly and returning a wealth of astronomical data.


Today Bernard Schmidt is seldom recognised among amateur Astro photographers for the wide field camera he designed to survey the night sky.


Schmidt died in 1935. In an asylum for the insane in Hamburg. His life was not happy, but the optical system which he developed was one of the most important of modern times.
Posted by RichardP at 00:15