There is growing corroborative evidence for a planet x beyond the orbit of Neptune which may be ten times larger than Earth, and which could be orbiting the sun at the edge of our solar system.
Researchers have discovered a dwarf planet called 2012 VP113, along with up to 900 other objects,  orbiting in a similar formation.
This suggests that a larger planet, dubbed a Super Earth because of its size, may be creating a shepherding effect pulling these objects around with it. 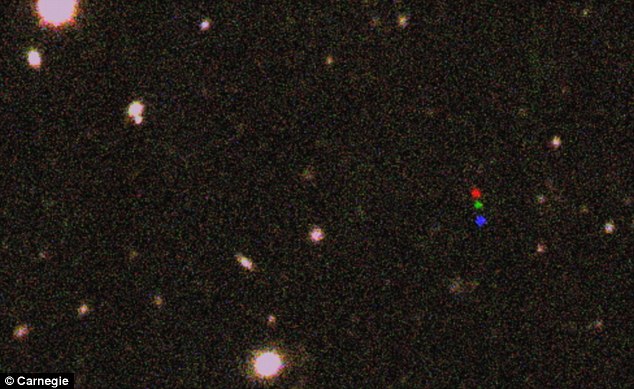 These are the discovery images of 2012 VP113. Three images of the night sky, each taken about two hours apart, were combined into one. The first image was artificially coloured red, second green, and third blue. 2012 VP113 moved between each image as seen by the red, green and blue dots.
There are three theories to explain the movement of these bodies.
One is a rogue planet could have been tossed out of the giant planet region and perturbed objects out of the Kuiper Belt on its way. This could have been ejected or still be in the distant solar system today.
The second claims a close stellar encounter could put objects into the inner Oort cloud region, while the third theory suggests inner Oort cloud objects are extra-solar planets captured by other stars that were near our sun in its birth cluster.
The total population of the inner Oort cloud is likely bigger than that of the Kuiper Belt and main asteroid belt.

2012 VP113 was first observed in November 2012 and announced in 2014. It is the most distant dwarf planet to be found orbiting our sun.
If it exists planet X would need to be approximately 280 miles wide (450km) and orbits beyond the comet-rich Kuiper Belt in a region at the very edge of the system called the Oort cloud to explain these observations.
Posted by RichardP at 23:48