The large (210km) asteroid (41) Daphne will occult a 9th magnitude star in the constellation of Taurus on the evening of Sunday, January 17 as seen from the UK and western Europe. The event is extremely favourable in that  the asteroid will block out the light from the star for an unusually long time - up to a maximum of ~26 seconds for an observer situated near the  centre of the shadow track and observers throughout most of the UK are  guaranteed to see the star disappear provided the sky is clear. 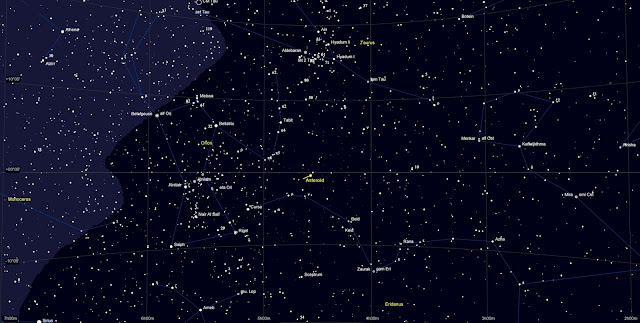 ﻿
Details of the event are available at: https://www.britastro.org/node/7075  which includes a map showing the expected track of the asteroid's shadow cast by the star as it crosses France and the UK. The shadow, when projected onto the UK, spans more than 300 km in width, and will track across >95% of the country in about 90 seconds. Depending on your viewing location, the star in question will be situated at an altitude of 30-40 deg towards the south-west, whilst a 61% illuminated Moon will be some 25 deg distant. UK-based observers should watch or video record the 9.7 magnitude star (TYC 0075-00715-1, RA 04h 26m 25.88s. Dec +01° 40' 43") at 22:42?22:47 UT. If possible, try and measure the exact times the star disappears and re-appears.
N.B. (41) Daphne also has a tiny moon some 2 km or less across and so this too may occult the star in a separate event lasting ~0.25 second or less shortly before or after the main event. When occulted, only the reflected light from the magnitude 13 asteroid will be visible.
The current weather forecast for Sunday evening is quite good with many areas of England and Wales expected to have clear skies interspersed with some cloud and the risk of some fog in localised areas furthest from the coast.
Detailed observing advice and finder charts are available on the webpage maintained by the BAA's occultation co-ordinator, Tim Haymes, at: http://www.stargazer.me.uk/
Please send observing reports, whether positive or negative, including timings to Tim (tvh.observatory [at] btinternet [dot] com) or myself.
Clear skies,
Richard Miles
Director, Asteroids and Remote Planets Section
Posted by RichardP at 13:54