When did the Crab Supernovae occur ? 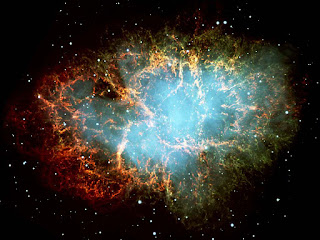 Did the Crab supernovae explode forth in 1184?

You can read the Blog of Polish HistorianSergey Kolesnikov on the page-link above.


MESSIER 1 the Crab nebulae is the most famous supernova remnant now on show in Taurus the Bull. Shining at Mag +8.4 it is visible in small telescopes as a fuzzy blob close to zeta tauri. We know that it was of a type II supernova because astronomers have studied the nebulae carefully over many years and came to this conclusion. However, there is a mystery to when the nova exploded into view. Also was it a recurrent novae prior to going supernovae?
Interpretation of some Chinese manuscripts give the date as being 7th July 1054, which has been trusted for many years by historians. In 1950 astronomers Helmut Abt and Bill Miller found, and photographed, a cave painting. It was located in the White Messa & Navajo Canyon. They interpreted this as showing the crescent moon, along with the crab supernova in Taurus on 4 July 1054. The hand print being the painting signed by the person who made the drawing. 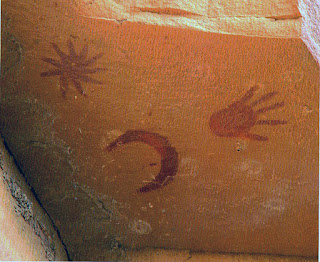 Unfortunately, the Moon was not in Taurus at this time, it was in Capricorn. The crescent moon was in Taurus on 17 July 1054, and so was the planet Mars shining at Mag 1.0. Therefore the cave painting could equally show the Moon/Mars conjunction! The crescent of the Moon, if it is that,  is also at the wrong angle & phase since the Moon was near First Quarter on the 17th.
Over many years astronomers, myself included, have naively continued to use the 4 July 1054 date as the origin of the crab nebulae, yet this date may well be wrong.
Now after years of careful research Polish Historian Sergey Kolesnikov has given astronomers a new date 11 May 1184.
Sergey Kolesnikov contacted me by face book a week ago, and kindly presented his research for consideration, and I must say it is appears to be conclusive. According to Sergey the cave painting shows the partial phase of the Total solar eclipse of 11 May 1184 along with the crab supernovae. The eclipsed Sun was indeed in Taurus on this occasion, and the cave painting would have been made to show this mysterious celestial event. As before it was signed by the person making the painting with his/her handprint -- or perhaps a depiction of  the Pleiades?
It would be great to devote a full program to this topic in the near future; so please can you contact me with your valuable thoughts, observations and comments. I will use as many as I can during the course of the program.
Richard Pearson.
Posted by RichardP at 14:57