Where to find the Moons of the major planets during Janaury 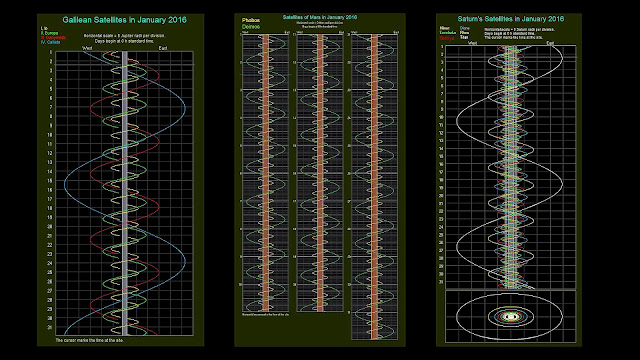 Click on the image for a better look
Here are the positions of the principal moons of the bright planets now on show at the moment. The four large Galileon moons of Jupiter along with Titan, the large satellite of Saturn, are visible in small telescopes. The Moons of Mars -- Phobos & Deimos -- are rather faint and may it may be easier to record them photographically. All of the moons of Saturn shown here can be seen in telescopes of 12 inch aperture.
Mutual Phenomena of Jupiter's Galileon Moons are now a regular occurance, the table below is calculated for 2 January 2016 for observer in the UK (Birmingham), and America (New York). Click on the image for a better look.  Clear Skies ...