The flight of Mercury Atlas 6 with John Glen


This was one of the most heroic space missions in history. For a start, the Atlas booster was not very reliable, and blew up on the first unmanned Mercury orbital flight attempt in March 1961. The next two unmanned orbital missions, who actually reached orbit, were only partially successful. Mercury Atlas 6 was originally another unmanned test before the decision was made to man it with Glenn.
The mission was originally scheduled for December 1961, before being rescheduled first for 13 January 1962, then 16 January. On 27 January, Glenn lay in the capsule for almost six hours before the launch attempt was scrubbed. The launch was rescheduled for 1 February, then 15 February, and finally 20 February when, after a further 3 hours 44 min in the capsule and six launch holds, Glenn was at last committed to launch. The Atlas thundered away on the pad, reached full thrust and, at 09:27 hours local time, finally became airborne. Glenn, his heart beating at a reasonable 110 beats per minute, announced the start of the mission in the now customary style, confirming that the spacecraft clock had started. Observers watched nervously as the Atlas 109D reached the point at which MA3 had exploded in March 1961. 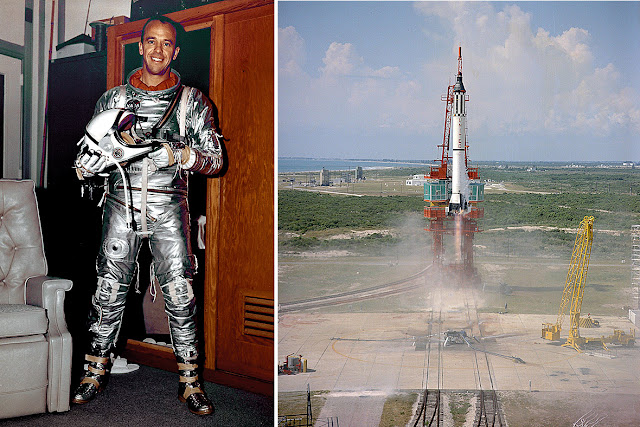 The vehicle went through Max Q - the point of maximum dynamic pressure on the vehicle-at T + 100 seconds and the two outboard engines cut off at T + 2 minutes 14 seconds. Glenn was subjected to 7.7 G acceleration during the five minute ascent, which ended at orbital velocity of 17,544 mph. Orbital inclination was 32.5° and maximum altitude was 165 miles. The capsule, Friendship 7, turned around and Glenn saw his Atlas tumbling about 30 m (98 ft) away. The view took his breath away as he looked back at the Cape, travelling backwards towards Africa on the first of his three planned orbits. Because his orbital status gave him "go for at least seven orbits", according to flight controllers, this has sometimes been misinterpreted to mean that this was the plan.
Glenn experienced problems with the automatic orientation system and continually had to manually correct a yaw motion. He also saw strange "fireflies" on the outside of the spacecraft, the source of which could not be explained at the time. The mission was proceeding tolerably well, until mission controllers received a signal with the disastrous news that the heat shield on Friendship 7 might be loose. If this was so, then Glenn would be killed during re-entry.

After the three retro’s had fired as Glenn was completing his third orbit, mid-way between Hawaii and Los Angeles (giving him the impression that he was heading back to the former rather than towards the latter), he was recommended to keep the retro-pack attached through the re-entry, although he was not told why. His heart rate peaked at 132. The change to the flight plan resulted in a more spectacular re-entry than envisaged, as first the straps holding the retro-pack and then the retro-pack itself were burnt away during the 1,650°C peak re-entry temperatures, at a speed of about 14,912mph and an altitude of 25 miles.

After a nerve-tingling wait during which communications were cut off by incandescent gases surrounding the craft, Glenn's hale and hearty voice was at last heard. The heat shield had not been loose after all. The main chute came out at 3,291 km (10,800 ft) altitude and Friendship 7 descended into the Atlantic Ocean, 6 miles from the recovery ship, the USS  Noa, northwest of San Juan, Puerto Rico, but 40 miles away from the prime ship, USS Randolph. The capsule with the astronaut inside was picked up, and Glenn injured his hand slightly when he blew the hatch. The flight time of 4 hours 55 minutes 23 seconds made this the shortest US manned orbital flight.
Posted by RichardP at 21:03