The Harvard College Observatory 80 years ago 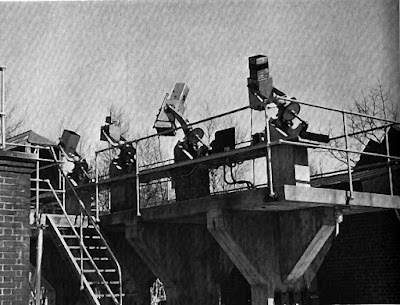 ASTRONOMY
& SPACE FEB 2016
STORY OF THE REFLECTOR
1. THE PIONEERS
Some of the earlier cameras of the Harvard Observatory patrol program. They were mounted on this special platform at the Oak Ridge station in Harvard, Massachusetts.


In 1935 Henry Sawyer became the night assistant at Oak Ridge. Among the tens of thousands of high-quality plates that Sawyer took in the next 15 years was a series with the 16-inch wide-angle Metcalf refractor. It covered the northern sky to about magnitude 18 and was used by Harlow Shapley for his studies of the distribution of galaxies. Every graduate student and visiting astronomer who worked at Oak Ridge during those years remembers Henry Sawyer as the stogie-smoking gray-haired Yankee in the fur cap. He owned five elderly cars in varying states of disrepair, but by transferring parts from one to another he could always manage to drive one of them from his home in West Acton to the station. An unusual feature of this home was a milling machine in the middle of the parlour. 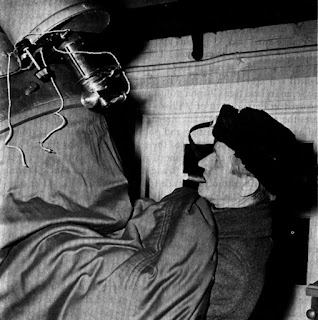 Here Henry A. Sawyer loads a plate into the 16-inch Metcalf refractor at Harvard's Oak Ridge station in Massachusetts. The lightproof cloth shroud was used because the plate was put directly into the camera back, without a holder. A partial vacuum bent the glass against a metal template that matched the curved focal surface. The eyepiece in the guide telescope may well be one of the Coddington oculars Sawyer used to make of Lucite. Photograph by P. Southwick.
For many years a large part of the astronomical research done at Harvard Observatory used the photographs Sawyer had taken.
Posted by RichardP at 12:36