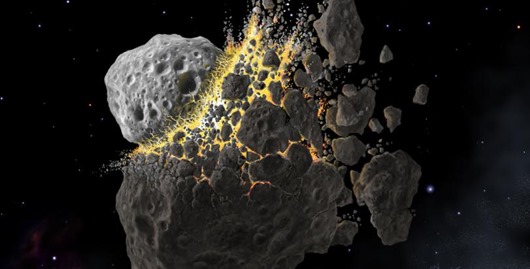 The planet we live on today has been shaped and moulded by collisions — both large and small. Although it’s next to impossible to determine the exact number, some estimates suggest that up to 84,000 celestial objects weighing more than 10 grams (0.35 ounces) may be entering Earth's atmosphere every year — most of which, thankfully, are too small to fall all the way to the surface.

One of the biggest explosions to have taken place in our cosmic neighbourhood in at least the past 3 billion years occurred roughly 466 million years ago, when an Asteroid Belt (between Mars and Jupiter) object collided with another body and broke apart, ejecting shrapnel that has since been falling on Earth as meteorites.

According to a new study published Monday in the journal Nature Astronomy, this event disproportionately skewed the type of meteorites that have been falling to Earth since much before the time of dinosaurs. So much so that the most of the meteorites we see today are, in the cosmic scale, rare, while many meteorites that are apparently rare today were common before the collision.

“Looking at the kinds of meteorites that have fallen to Earth in the last hundred million years doesn’t give you a full picture,” study lead author Philipp Heck, a scientist at the Field Museum of Natural History in Chicago, said in a statement. “It would be like looking outside on a snowy winter day and concluding that every day is snowy, even though it’s not snowy in the summer.”

In order to get a picture of the composition of meteorites that struck Earth before the massive asteroid exploded 466 million years ago, the researchers hunted for micrometeorites — tiny specks of space-rock less than 2 millimetres in diameter. They found some in an ancient seafloor along the Lynna River in Russia that are roughly a million years older than the asteroid explosion.

“Chrome-spinels, crystals that contain the mineral chromite, remain unchanged even after hundreds of millions of years,” Heck said. “Since they were unaltered by time, we could use these spinels to see what the original parent body that produced the micrometeorites was made of.”

After analysing these micrometeorites, the researchers found that the celestial objects that fell to Earth earlier than 466 million years ago had a markedly different chemical makeup. More than a third of these bodies belonged to a type called primitive achondrites. Today, most meteorites that land on Earth are H and L type chondrites, and less than half a percent are primitive achondrites.

This means the asteroid explosion that took place during the Ordovician period has been masking the diversity of bodies that have impacted Earth through its 4.5 billion year history.

“Knowing more about the different kinds of meteorites that have fallen over time gives us a better understanding of how the Asteroid Belt evolved and how different collisions happened,” Heck said. “Ultimately, we want to study more windows in time, not just the area before and after this collision during the Ordovician period, to deepen our knowledge of how different bodies in Solar System formed and interact with each other.”