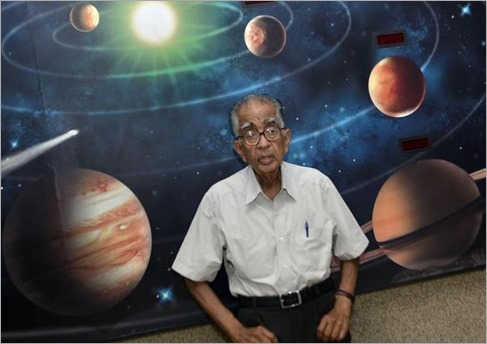 C.V. Vishveshwara, who pioneered Indian research on black holes and was the first director of the Jawaharlal Nehru Planetarium, passed away late on Monday night after a period of illness. He was 77.

As the first director of the planetarium, he was instrumental in taking astronomy to the masses, having been personally involved in every aspect of the creation of programmes that have enthralled thousands of visitors for over three decades.

“He was a good scientist and was taken on honorarium, essentially working for free there. He was very good at communicating science to the public and used his deep knowledge of Kannada to ensure locals were interested in astronomy,” said U.R. Rao, chairman of the governing council of the planetarium.

Academically, Prof. Vishveshwara leaves behind a rich legacy after having been associated with the Indian Institute of Science, the Raman Research Institute, and the Indian Institute of Astrophysics. In the 1970s, while at the University of Maryland, he was among the first to study black holes, even before they had been so named. His calculations gave a graphical form to the signal emitted from two merging black holes — which was finally detected in 2015 by the LIGO collaboration.

Prof. Vishveshwara, popularly called ‘Vishu’, was also known for his cartoons. Commenting on his style of lecturing, Prof. Bala Iyer, a long-time collaborator, said, “For me, it was a magical experience: an exotic cocktail of science, art, humour and caricature.”

Meanwhile, the Jawaharlal Nehru Planetarium entered the digital age with the launch of its new sky projector — which displays the primary programmes for thousands of visitors — on Tuesday.

The ₹12-crore hybrid projector was launched by Chief Minister Siddaramaiah. “Our old projector was over 25 years old and was completely analogous. The new machine was selected as it could play digitally. The images will be clearer and the projected programmes more powerful,” said U.R. Rao, chairman of the governing council of the planetarium.