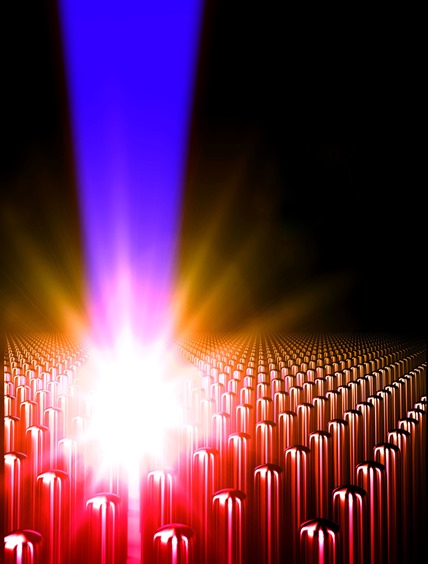 The energy density contained in the centre of a star is higher than we can imagine – many billions of atmospheres, compared with the 1 atmosphere of pressure we live with here on Earth’s surface.

These extreme conditions can only be recreated in the laboratory through fusion experiments with the world’s largest lasers, which are the size of stadiums. Now, scientists have conducted an experiment at Colorado State University that offers a new path to creating such extreme conditions, with much smaller, compact lasers that use ultra-short laser pulses irradiating arrays of aligned nanowires.

LEFT: nanowires being irradiated. Representation of creating ultra-high energy density matter by an intense laser pulse irradiation of an array of aligned nanowires. Credit: R. Hollinger and A. Beardall

The experiments, led by University Distinguished Professor Jorge Rocca in the Departments of Electrical and Computer Engineering and Physics, accurately measured how deeply these extreme energies penetrate the nanostructures. These measurements were made by monitoring the characteristic X-rays emitted from the nanowire array, in which the material composition changes with depth.

Numerical models validated by the experiments predict that increasing irradiation intensities to the highest levels made possible by today’s ultrafast lasers could generate pressures to surpass those in the centre of our sun.

The results, published online Jan. 11 in Science Advances, open a path to obtaining unprecedented pressures in the laboratory with compact lasers. The work could open new inquiry into high energy density physics; how highly charged atoms behave in dense plasmas; and how light propagates at ultrahigh pressures, temperatures, and densities.

Creating matter in the ultra-high energy density regime could inform the study of laser-driven fusion – using lasers to drive controlled nuclear fusion reactions – and to further understanding of atomic processes in astrophysical and extreme laboratory environments.

The ability to create ultra-high energy density matter using smaller facilities is thus of great interest for making these extreme plasma regimes more accessible for fundamental studies and applications. One such application is the efficient conversion of optical laser light into bright flashes of X-rays.

The work was a multi-institutional effort led by CSU that included graduate students Clayton Bargsten, Reed Hollinger, Alex Rockwood, and undergraduate David Keiss, all working with Rocca. Also involved were research scientists Vyacheslav Shlyapsev, who worked in modelling, and Yong Wang and Shoujun Wang, all from the same group.